I’m not sure how I’ve missed trying this beer before. Being a son of Ireland I’m a sucker for anything Irish, and Irish Reds have always had a special place in my heart as Killian’s was one of the first “better” beers I graduated to after years of Natty Light. So on to my review of Sam Adam’s Irish Red… which is really not much of an original name (more on that in a minute). 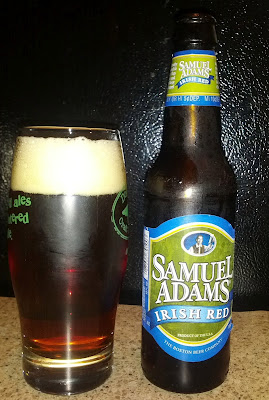 This pours a beautiful red hue with a decent amount of fluffy yellowish head, though my pour may have been too vigorous. The head leaves some lacing as the beer goes down, and sticks around for a while.

There is a strong presence of caramel as soon as my nose gets close.

A nice medium-bodied mouthfeel though there isn’t as much carbonation as I’m used to with other Irish Reds.

The flavor is slightly buttery (which beer aficionados call diacetyl, which was something new I learned tonight) with more hints of caramel malt, very little hop action though.

Overall it reminds me a lot of most Sam Adams beer, very typical of the style and pretty darn good… but not great and almost always bested by a smaller craft brewer.

Now, as promised, I want to say a quick word about beers and their names.

I realize that Sam Adams sucks at naming their beers; Irish Red, Boston lager, Summer Ale, Pale Ale, Cherry Wheat, Winter Lager, White Ale. That kind of blows compared to companies like 21st Amendment with their Hell or High Watermelon or Dogfish Head’s Midas Touch (temporarily ignoring the 60, 90, 120 Minute IPA). On the one hand I’m thinking they need a better marketing department, but on the other hand we have the side of gateway beers. There is certainly something to be said for being the biggest gateway beer supplier. They make loads of cash, but more importantly provide a path to better beer. Both for brewers, with the Long Shot competition (won by Cinci’s own Jason Roper of Rivertown Brewery), and consumers, with easy to acquire and understand beers whose names match their styles. In the end I will say that I prefer Sam Adam’s simple names, you know what you’re getting, and if you know nothing more than what AB-Inbev has told you you’re about to learn a lot!