This is one of the most interesting and complex beers I’ve had the opportunity to try. La Trappe took a Belgian Quad, already one of my favorite styles, and let it mature in old whiskey barrels. This resulted in something amazing… 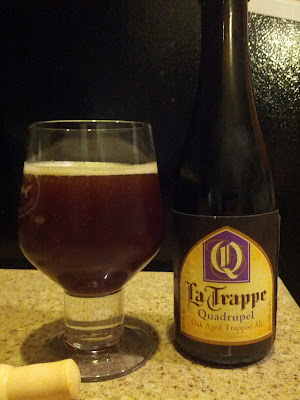 There is a slightly fruity smell which is kinda standard for Belgians, also the alcohol is very noticeable.

The taste is… very curious, there is a warmth that reminds me of the whiskey barrels this was matured in. While I smelled, or at least thought I smelled, some fruitiness I don’t really taste any. There is maybe a little tiny bitterness from the hops, but not much bitterness to speak of at all compared to many beers.

There is a lot of sediment and a fair bit of carbonation in here and you can tell it in the mouth feel. It’s got a slightly heavy body feel.

Um, this is strong… I’m about halfway through and can definitely feel the power of that 10% abv. Honestly I wouldn’t be surprised if this has matured past 10 and moved closer to 10.5%.

This is a complex beer and I’m not really sure what to think about it other than how awesome it is. I give it a solid 4.5/5 rating and I’d strongly recommend picking it up if you get the chance.

You may have noticed that the bottle I tried was from Batch #7. There are a total of 8 batches so far and each one is a bit different. The big change between each batch is which barrel is used. For the most part they seem to be old wine or beer barrels. Batch #7 was a special case where they borrowed some whiskey barrels for the maturing process.Here’s what La Trappe says about this batch:

“BATCH 7 is blended in June 2011 and is the first batch (of two) that has matured in old whiskey barrels. These barrels come from different whiskey distilleries such as Bowmore, Tamdhu, Strathspey and Laphroaig (Johnstons). The aroma’s of the whiskeys have an obvious impact on the final flavor. This flavor is remarkable and clearly different from those of previous batches. Peat and burnt are more present, while wood and wood tannins are less obvious to spot. But the warming effect of the full, robust flavor the whiskey barrels passed on to our already beautiful Quadrupel, makes this batch maybe even the most tasty brewed to date.”