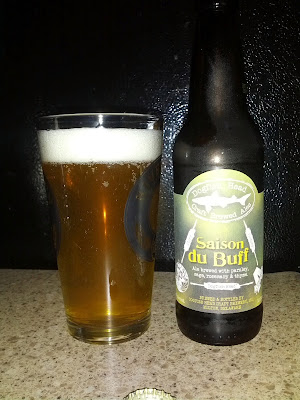 Pours a beautiful golden color with a nice white fluffy head, really looks like the “ideal” or “prototypical” kind of beer. Ya know that way everyone “thinks” that “good beer” should look, yeah that’s this… at least in looks. The lacing on the head sticks around until the glass is empty.

Uck, the taste is so viciously sour.

It smells flowery with hints of rosemary, which of course is one of the ingredients they added.

Back to that taste, it has slightly improved since my first initial sip, but it’s still overpoweringly sour. It reminds me of warhead candy. I can pick up on the rosemary, sage, and parsley that they included but it’s kinda faint and the major attribute to the taste is the sourness. By the time the glass is empty I’ve gotten used to the sourness and no longer find it as horrible or shocking as I did initially.

The mouth feel is light and bouncy with a fair bit of carbonation which gives it a rather nice feeling.

I don’t like sour ales and knew this going into this beer, so my displeasure is no surprise. But I love DFH and Victory, I kinda like Stone but a lot of people love them, so I had to give it a go.

First off a bit about the brewery/breweries. This beer is a collaboration from BUFF, Brewers United for Freedom of Flavor. BUFF was formed in 2003 by Dogfish Head, Stone, and Victory brewing companies as “a noble endeavor with the goal to highlight the passion and camaraderie of the American craft brew movement.” The 3 breweries decided to use the same recipe and same ingredients and brew their own batches of this beer. The one I had was from Dogfish Head and is likely all gone, but  Victory’s came out last month (April 2012) and Stone’s will be out sometime later this month (May 2012). The packaging for each will differ so don’t depend on my picture to help you find it in stores. For more info check out DFH’s site.

So after my big article on the history of Trappists I’m trying as many Belgian’s as I can get my hands on and the saison is a cousin, if you will, to Belgian Ales. Saisons are, to me, kind of an interesting style of beer… even though I don’t like them. The word saison just means seasons in french, they don’t come from France but from a french-speaking part of Belgium. As a part of the overall Belgian family of beers this inclines me to try to like it and thankfully, finally, with the saison du BUFF I don’t have to try to hard! According to the BJCP these were originally brewed as a refreshing summer drink for people working out in the fields on hot summer days because the water wasn’t that safe to drink. They’d be brewed at the end of winter, often mixing the new batch with some from last year, and then stored until summer. Now you know!

Keep an eye out in the coming days for more Belgian reviews!