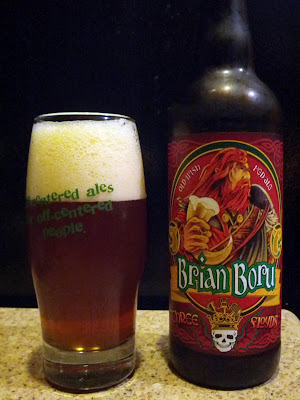 Pours a beautiful reddish brown made slightly cloudy by some carbonation. There was so much head that initially I thought I did a really bad pour, but on my second glass (pictured) I, IMO, did a great job pouring it and still ended up with quite a bit of head. So this is just a really heady beer. It’s a nice looking off-white head that hangs around for a bit and leaves lacing on the glass for quite awhile.

Smells of roasted malts with a bit of caramel, some citrus, and what I smell as fruit but the bottle suggests is pineapple… umm, it’s an IRISH style… what is a tropical fruit doing in here? This must be the new perspective my friend mentioned.

It tastes quite a bit like it smells, I can really tell that fruity smell is actually some tasty pineapple. I’m also picking up on some tasted malt or maybe grains added in as well as a bit of toffee. There is a small amount of bitterness which comes off very nicely. That pineapple flavor does hangs around for quite a bit after the beer is gone.

The mouth feel is kind of slick and oily with mild carbonation, which I don’t really find very enjoyable.

Overall this is a very interesting take on Irish Reds, interesting… not great. I’m not a huge fan of pineapple, every once in a while I can get down on a Hawaiian pizza but other than that I don’t eat pineapple. So that kinda put me off on this a bit. Also, even though I gave Sam Adam’s some crap for how typical their Irish Red is the Brian Boru is too far out of the general style it’s off-putting. If someone loved pineapple I would strongly recommend they check this out. As this is seasonal I can see myself picking up another bottle in a year or so, but I wouldn’t really drink it more often than that. All things considered I feel comfortable giving this a 3/5 rating.