Spring is gone and summer is here… well, not for another month but breweries tend to get ahead of the actual seasons.  I don’t even know if this is actually Moerlein’s summer, but it should be. 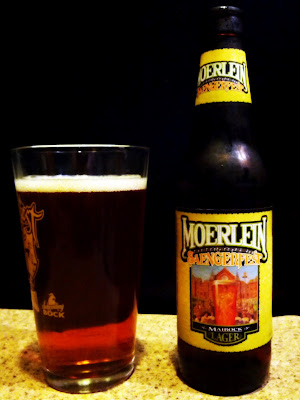 This is an awesome looking reddish brown color with a nice bit of head that fades away pretty quick.

Taste has a bit of vanilla in it as well as more of that malt and caramel. I don’t want you to think this is an overly sweet beer, but there is more sweet than bitter going on here. Speaking of bitterness it comes in on the back end of the swig, but is rather mild.

There is some medium body and mild carbonation to the mouth feel.

This makes an awesome session beer and makes me proud to be from Cinci. It’s got an interesting character with a nice relaxing flavor and a session worthy strength, that’s what I look for in a summer beer. Considering this comes out for a month or two following May I’d say it is a summer style in all but marketing. I feel comfortable giving this a solid 4/5 rating.

Now aside from the beer itself I normally don’t care about  the packaging too much and the little blurbs the advertising folks put on the bottles. But this is Moerlein and I’m biased to Cincinnati… this is Queen City Drinks after all. So the little blurb here is:

Cincinnati’s Saengerfest choral celebrations started in 1849, and quickly became the Midwest’s most monumental festival. That led to the 1878 construction of Music Hall, just blocks away from the beer garden, which was built for the Cincinnati May Festival. The choral festival continues the saengerfest tradition, that it started in 1873. The beer is “a well balanced Maibock characterized by spicy and floral noble style hops.” It’s a deep golden lager, what is called a “blonde bock.”

I really wanted to point this out because of the knowledge imparted upon me by reading Over-The-Rhine: When Beer was King. This is a great example of how Cincinnati used to be amazing, hosting big choral festivals, then went down hill and became home of ruin, and has now recovered to host the world choir games.