Ok, I’m not a fan of starting with a negative but man is that name a tongue twister, Great Lakes Lake Erie Monster. The back-to-back lakes and mention of lake monsters makes me want to say it’s Great Lakes Lake Loch Ness monster. But don’t let that dissuade anyone, this thing is rock star! 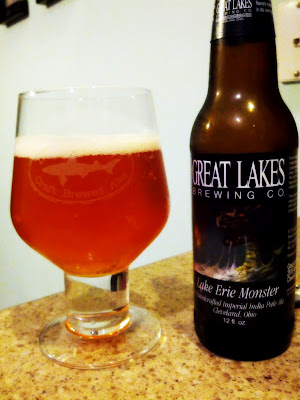 This smells strongly of hops and alcohol with a fair bit of citrus coming to my nose as well.

Woah, that is a powerful taste. Tastes strong of citrus and alcohol with quite a bit of hop bitterness mixed in there as well. There is a nice bit of caramel flavoring from the malts to sweeten it up and balance it out some.

The mouth feel is pretty nice with a mild body and lots of carbonation.

This is a pretty rocking Imperial IPA and boy there is stress on that imperial part. Also, unrelated to the beer itself I love the design on the front, that monster is pretty sweet looking. Overall this thing is awesome I’m more than happy to give this a 4.5/5 rating. The only way it could improve is to ease back on the impact of the alcohol, it  kinda slams you in the face.

Here is Great Lakes in-depth info on this tasty brew. I strongly recommend scoring a 4-pack of this while you can, you only have until July and that’s assuming supplies don’t run low.