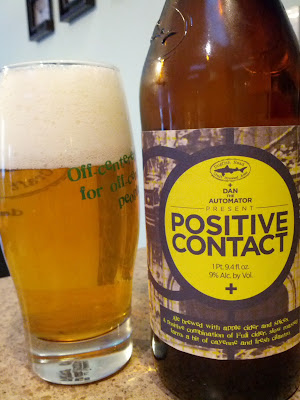 This is a brand new beer from the folks at Dogfish Head. Part Belgian witbier, part cider, all Dogfish Head craziness. I’ve been psyched about this beer for a while now. I usually try to ignore the marketing hype stuff but this beer signals the coming of something more important to me than another buzz. This is named Positive Contact in tribute to the album Deltron 3030 from Del Tha Funky Homosapien and Dan the Automator. This album came out in 2000 and was astounding futuristic hip-hop. Since then Del and Dan have done a variety of other projects with no more word of Deltron… until now. Positive Contact (the beer) is being sold in 6-packs of 750ml bottles with a 4-track vinyl of dub mixes. This is also signaling the coming of Event II, the next Deltron 3030 album! So I’m psyched about all that, plus I generally like the crazy stuff Dogfish Head does. Anyway, on to the beer!

The smell isn’t super strong in anyway but it smells similar to a Belgian with more apple than usual. You can really tell the cider influences in the taste, but it’s still more Belgian than anything else.

The taste has plenty of apple flavor, a bit of spiciness. For as sweet as this may be sounding, and I expected it to me it’s really not overly sweet.

This isn’t amazing, but it’s good and interesting. Oh, and the strength is not at all noticeable to me, on taste/smell alone I’d guess it’s 6 – 7% not 9%.

I’m happy to give this a solid 4/5 rating. If I ever get my hands on a record player I’ll let you know what the album sounds like. Until then check out Positive Contact (the song).