Flying Dog has a great series of beers on their hands here, even though I’ve only had 2 out of 4 (or 5, not sure). Basically the premise behind their line of Single Hop IPAs is just that, they use a single hop. Many IPAs use 3 or 4 or more varieties of hops to create the ultra hoppy beers which are all the rage these days. Flying Dog decided to forget all that and release a series of beers that focuses on a single hop. This gives you a clear vision of what that hop smells and tastes like. On top of that awesomeness the 2 that I had both rocked! Here’s my review of the Chinook: 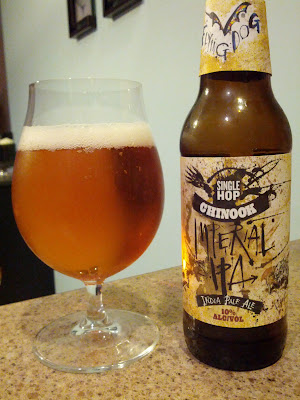 Packs a visually pleasing amber brown with orange hues mixed in. There is a very slight head from a somewhat heavy pour.

Straight upfront smell of grapefruit with some slight sweeetness behind it like how my mom used to put a bit of sugar on her grapefruit. This is followed up by some pine and citrus as it warms up a bit, standard IPA type smells though.

There is a lot of spice flavor in the taste along with the grapefruit and pine picked up from the smell. I’m no home brewer but I’m reading this that say this is a bittering hop which I find very surprising. There is only a medium-ish level of bitterness in this beer, not the over powering bitter people describe this having. I also find a bit of sweetness to balance all this out with caramel.

This is the second beer I’ve had from Flying Dog’s Single Hop line and I really like the concept. So many beers throw in as many hops as they can but Flying Dog lets you get to know each hop style one at a time.Oh yeah, that’s a strong mother fucker too! It packs a small bit of alcohol bite in each sip, not enough for me to have mentioned while drinking it… but now that the glass is empty, Woah!

I would strongly recommend picking this up (I scored this bottle from the Beer Blogging Conference but I’ve gotten previous beers in this serious at Jungle Jims) or any other beers in this series. You get a great beer, a lesson on hops, and drunk all in one bottle!