I’ve bee holding onto a few special beers for a while and decided to go ahead and drink one tonight. I took the day off work tomorrow and it’s my birthday so I might as well treat myself to something special on a Tuesday night. Earlier today I had put up a poll on our Facebook page, but only 1 person actually voted and I’m not sure how much his vote counts since he also writes for this blog lol. Josh voted for the Westy 12 and I was about to have it but then got to thinking that he just posted a review of it a month or so ago. This made me decide to throw it in the basement and do my best to forget about it for a while. Both to let it age and to give some time between our two reviews. So anyone hoping for a Westy 12 review will have to hang on for a while. Instead everyone is being treated to a review of Dogfish Head’s batshit crazy 120 minute IPA. 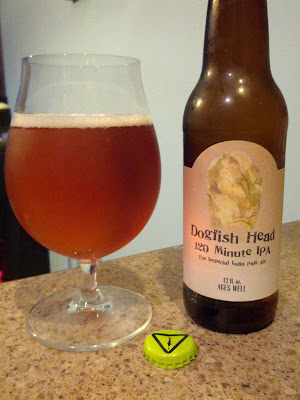 Beautiful amber brown to grungy orange/gold color depending on how the light hits it. This is super hazy with a minimal white head that disappeared fast.

Like Lynyrd Skynyrd said ‘Ooh that smell, can’t you smell that smell!” You can’t help but smell this smell, it is strong, potent, and aggressive. Lots of hops and even more alcohol, no doubt this is far stronger than most other beers out there.

First sip: cough cough did I just take a shot? My throat and chest feel like I just took a shot of some weak whiskey with a slight burn all the way down. It’s not really nearly as bitter as I expected for as hopped as it is. Per the DFH site “it’s continually hopped for 2 hours (hence 120 minute) with high-alpha American hops, then dry-hopped daily for a month, and aged for another month in whole-leaf hops” It’s actually a pretty smooth taste though, pardoning the bite of the alcohol.

The mouthfeel is again very smooth and medium bodied with light carbonation going on.

This is the third time I’ve been lucky enough to have this beer, and lucky is the only way to describe it. You can’t buy it in Ohio because are laws cut off malt beverages at 12% ABV. Though you can get lucky in Kentucky as they have no such limits. So great, it’s sold across the river should be easy to score right? Yeah, no. It’s only brewed a few times a year and if a store is going to get any of that batch they will probably only get 1 case.  From things I’ve heard half or so automatically goes to employees. After that it’s first come first serve and you’ll probably only be able to buy 1, so bring a friend or a $20 that just happens to magically appear on the counter. To sum that up the best way to score it is to follow DFH on Facebook and twitter, they usually announce when they’re brewing/bottling/shipping stuff. Then swing by your better beer seller in Northern Kentucky and make friends with the employees, greasing palms where necessary until they’re willing to give you a call when it comes in.

Once you get it home you can throw it in the basement for a few months years to let it get a bit sweeter, or throw it in the fridge for immediate consumption. If you do fridge it you want to let it warm up a bit before drinking… and make sure you don’t have plans to drive that night or work the next day. I mean hell, I’ve only drinking maybe 1/3 of it and I’m well passed intoxicated and on my way to drunk.

In the end this beer is like most DFH brews. They take a style, do some different things, and push it to the extreme. I have yet to think of any DFH beer as amazing or a 5/5 or anything like that, but they are all guaranteed to be very interesting!

Oh, and I LOVE the bottle cap!