OK, so I feel bad. I keep reviewing beers that you can’t get around here. But hey, if you travel through somewhere and see this then you’ll know to grab it and bring it home to share! This is also an awesome beer with a great story.

Not just a great story, but also a strange complex story all about the name. So the (current) name of this beer is G’Knight   I say current name because it used to be called Gordon Ale. It was called this in tribute to what can only be described as an all around awesome American. They kind of kick ass guy who makes you proud to be an American and makes me want to drink a 4-pack of these cans (which is how they’re sold) and sing America, Fuck Yeah! Gordon Knight was born in Nebraska and ended up being a helicopter pilot in Vietnam, earning himself a purple heart in the process. Bad Ass. He came back to the states and was involved in a number of breweries around Colorado wining multiple golds at the Great American Beer Fest. Bad Ass. Not content to just brew beer he also FOUGHT FIRES FROM A HELICOPTER. Bad Fucking Ass. Sadly he gave his life fighting a fire just outside the hometown of Oskar Blues brewery and in honor of his Bad Assness they named this beer after him. You can read more on Gordon Knight here, which is my source for all of the above.

Unfortunately there was already a Gordon Biersch Brewery Restaurant Group, but they were cool with the name Gordon Ale. They worked out a deal with Oskar blues where Oskar could use the name as long as they didn’t distribute to states where Gordon Biersch was. Not a big deal at the time since Oskar was still a small place. But as all good breweries do Oskar expanded and killed the deal by entering direct competition w/ Gordon Biersch. Thus a cease-and-desist letter was sent and the name was changed to G’Knight. This isn’t some story of big guy screwing little guy or anything like that. Just kinda the nature of expanding business in a tight highly competitive environment. And hey, really it went from Gordon to G’Knight. Not that big of a change in my opinion. Again you can read more about all this here, which again is my source for it all. Just be sure to read the whole thing. 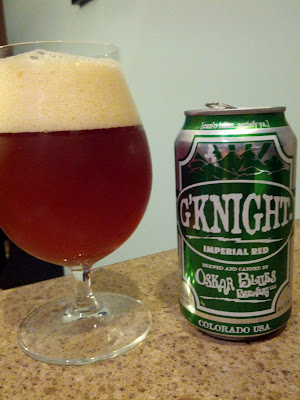 Drops into the glass with a cream color head built of teeny tiny bubbles. The color is definitely as red as it is brown, very nice amber hue. Oh, and that head hangs around the side of the glass as you drink it down.

Packs a sweet (as in candy) malt mixed with a hoppy aroma of piney resin and grapefruit, basically your standard smell for heavily hopped American beers.

The taste starts off with plenty of malty caramel action with some tones of honey in the background. Then the hops begin to rise bringing with them a slight bitterness and grapefruit, pine, earth flavors. The alcohol is certainly present on the taste in an unfortunately chemical kind of way.

Creamy and smooth mouth feel, a bit of carbonation, and a warming in the chest bring this beer to a close.

Hop enthusiasts may be a bit disappointed by this but it is a great beer. Bottom line is that I will always buy this if I see it.

As for where I got it I scored this beer while diving through Nashville but I’ve also seen Oskar Blues beers in North Carolina (specifically Asheville). Checking out Seek-A-Brew I see they distribute to Pennsylvania as well which is not to far off, be sure to check out seek-a-brew before any future travels.

P.S. it’s really f’ing hard to write a blog post without a fully functioning space bar. From a personal perspective upon proof reading this I am very proud of this post and feel it may be some of my best work yet, space bar be damned.