Beer Advocate has this at a 95 (off 2,516 reviews), rate beer puts it at 100 (based off 2,837 reviews), finally untappd knocks it down to 4 stars which I guess compares to an 80 (from a whopping 10,861 ratings). That gives me a pretty solid feeling that this will be a fantastic beer. Basically 14,000 people gave this beer an average of an A-. This beer gets a lot of hype as being some crazy bitter uber hard core beer that is not for wussies and needs some kind of beer pedigree to drink. That whole mindset doesn’t sit too well with me. It’s that type of thing that prevents people from getting into craft beer in the first place. Sure it’s safe to recommend a friend to stay away from this for a bit and steer them toward something else first. But by hyping this beer up so high in the end puts your friend down saying they aren’t good enough for this beer. Anyway, rant over time to drink! 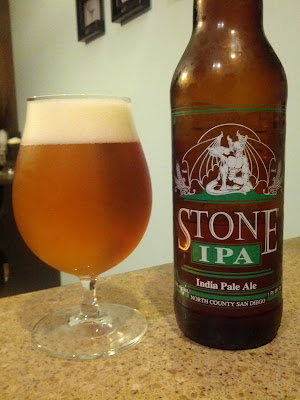 The taste is pretty hoppy but not crazy like I expect from Stone. The hop taste is spicy as well as some pine, the malt brings in biscuity flavors but are very minor compared to the hop presence. Don’t underestimate what I’m saying here, this is a very hoppy beer but compared to lots of IPAs and other Stone beers it just isn’t that big of a bite.

Overall this is a pretty standard IPA across the board with a fair bit more hops than usual but nothing that makes it too outstanding or crazy. I’m not overly excited by this and I definitely don’t feel that it lives up to the mass hype. Sure it’s a GOOD beer but it’s not a GREAT beer and I disagree with the very high scores it’s gotten on the beer review sites.