My friend scored this beer for me a few days before all those Stones came in and I decided to take a break from the Stones and give this a go. Green Flash is rapidly growing as one of my favorite breweries. I only discovered them recently due to a friend (the same friend who hooked up the Hop Head Red) and luckily, unlike some other recent breweries I’ve found, Green Flash is widely available in Ohio! In the past I’ve had their Palate Wrecker DIPA (review here) and The Hop Head Red (review here) both of which I loved it. I’m excited to try my favorite beer style from one of my new favorite breweries. On to the beer! 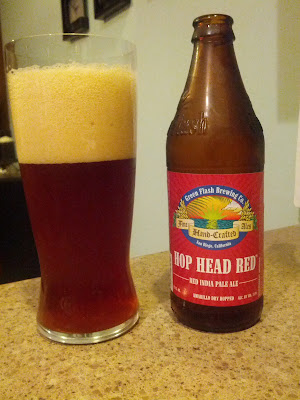 Woah, so heady… yeah. Not sure I choose the wrong glass here or if this is just a crazy heady beer. The glass is supposed to be for  “powerful IPAs” so I figured it’d work. Anyway, I love the color here a great darker brown with a strong dose of red floating around in it, basically the color of a ruby. This beer packs some serious haze as well, you can see through it but only fuzzy objects.The head poured out thick but has dropped slowly leaving lacing all the way down.

The smell is full of caramel and pine which combines to make a very pleasant and enjoyable smell.

There is a great sweet taste up front with some playful hop bitterness in the background. I say playful because it’s definitely there but not intense, kinda just right. The hops bring in citrus flavors as well packing plenty of grapefruit action.

The mouth feel is uber smooth, very light bodied, and mildly carbonated… in other words Awesome.

In the end this thing is fantastic and I’m sad I only have one. I digg the sweetness of the amber style mixed in with the bitterness and alcoholic strength of the IPA. One weird thing is that there is some sediment at the bottom. That’s pretty surprising to see in an Amber IPA, it’s much more common to Belgians or other bottle-conditioned beers. It doesn’t diminish from the awesomeness at all, just wanted to let people know to not get freaked out by it.

As for the additional facts that I added into this post I just want to take a minute to explain those to people who might now know. The ingredients in beer break down to water, hops, malted barley (malt) and yeast. What most people care about are hops and barley, since they change the most and often have the largest impact on style/flavor. One day I’ll write a post about (some) of the different hop varieties and what they mean. IBU stands for International Bittering Unit which in theory provides a general guide to how bitter a beer will taste. Key words being theory, general, and guide. IBUs really just measure how much bitter hops there are, it doesn’t account for malts. One day I’ll talk more about that as well.

Until then drink well my friends!