Green Flash is rapidly growing as one of my favorite breweries. I only discovered them recently due to a friend and luckily, unlike some other recent breweries I’ve found, Green Flash is widely available in Ohio! In the past I’ve had their Palate Wrecker DIPA (review here) and The Hop Head Red (review here) both of which I loved. I’m now extremely excited to try my favorite beer style from one of my new favorite breweries. On to the beer! 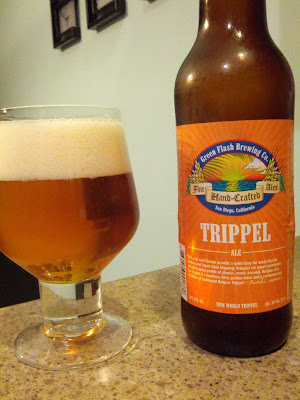 Oh how I love the beautiful color of a tripel! It’s GOLD Baby! Bright, hazy, beautiful golden liquid of the gods. Superb layer of snow white head that lets it’s lace linger down to the last drop. It’s been way too long since I had a Belgian.

Good aroma of spicy hops with some nice banana esters as well. Classic Belgian scents combined with a slight hint of alcohol as well.

Bit heavier on the spice flavors then some tripels, but not overly so. Lots of citrus fruit action happening on my tongue here. That is all slightly balanced by a nice malt build. Not the best tasting tripel I’ve ever had, but a good one.

Smooth and crisp mouth feel with a very light body and plenty of carbonation.

Overall I’m a little disappointed. It’s been a while since I had a tripel so I was pretty psyched for this one. That with the combination of it being a Green Flash beer, and the first Green Flash that I wasn’t wowed by. Whatever putting that stuff aside this is still a tasty beer that I’m happy to drink. Am I gonna recommend it to people? Eh, probably not. There are many other tripels and Green Flashs that should be had long before this.