I had decided to focus on locally available beers but then an awesome new beer buddy decided to rock my world and hook me up with some tasty offerings. Firestone Walker Brewing Company is one of those legendary California breweries, but it’s still kinda climbing the ranks compared to some places like Stone or Russian River. Just looking at Rate Beer there are 22 beers from Firestone with 90+ scores. They won the World Beer Cup for mid-sized brewery in 2004, 2006, and 2010. The Union Jack has won 12 awards since 2008 ranging from bronze to gold from competitions around the world. 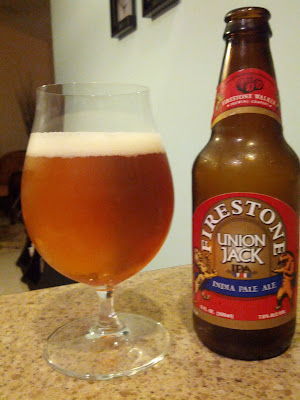 Great aroma of grapefruit that is very pungent, hints of other citrus stuff. No malt or sense of the strength.

Taste is also excellent here. Lots of citrus action on the tongue with a heavy hop presence. The malt that was missing in the aroma is present in the mouth, nice bread action that doesn’t come close to being balanced with the hops.

Overall a good beer, not a great or amazing beer, but extremely satisfactory. They really nail what an IPA should be with a super taste. But I wouldn’t go out of your way to hunt this down or do any crazy trades for it or anything. Other than that if you see it try it (though that advice goes for pretty much anything)!