Recently I’ve embarked on a voluntary freeze on cellar beer purchases so that I could force myself to:

This has had me thinking a bit about proper cellar technique. I thought I’d pass some tips on to those of you who are new to cellaring beer or are considering starting to do so. 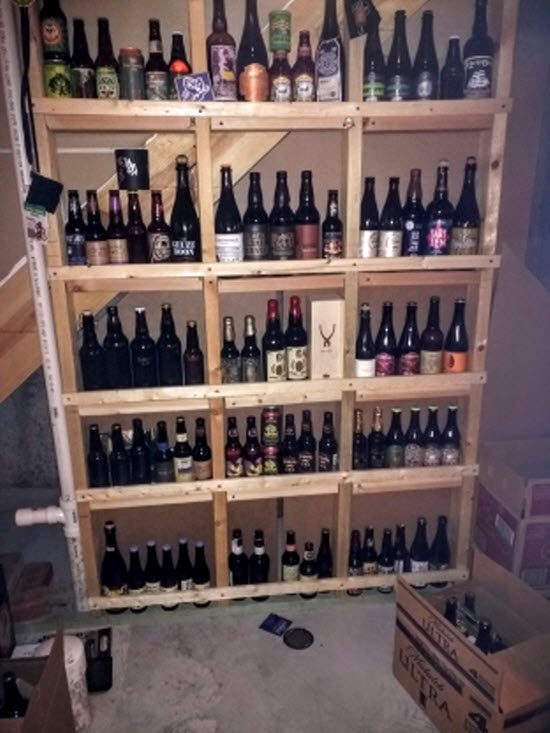 The most important thing here is light level and temperature control. You don’t want a beer that is light struck. While the amber-colored bottles that most breweries use to bottle with do help cut down on the light entering the beer, you’re going to want to keep your bottles in something like a closet or other area where there isn’t going to consistently visible light. You can read why light on your bottles over a lengthy period is bad here. As a quick aside, this is also a reason I am weary of buying beer that has sat on a bottle shop shelf forever under lights.

As for temperature, an ideal is probably in the 50-60-degree range. This isn’t easy to do, which is why a makeshift “cellar” in your bedroom closet isn’t going to cut it. You can store beer at higher temperatures than that for a short to moderate time frame (depending on the beer and the temperature), but if you’re counting on building a ten-year vertical of your favorite stout, you’re going to need a cool basement or a small refrigerator to store it in. Note: just like you don’t want a hot cellar, you also don’t want one that gets below freezing in the winter.

I recommend that you store bottles upright, though this has been argued to death in the beer community. My logic is that since many of the beers I cellar are bottle conditioned, I’d rather have that yeast settle to the bottom of the bottle than on the side (which would happen if you laid them on their sides).

I’m not going to get into the science of this, but beers I’ve had the best luck with have had one of more of these characteristics:

There are exceptions, of course. Some people like to cellar Sierra Nevada Celebration Ale, which is none of the above. I have one specific additional rule for my cellar, which contributes to why I’ve been drinking mine down recently. I do not like to cellar a beer that I have not tried fresh before. I just don’t understand why you would cellar a beer when you have no baseline to measure the cellared beer against. I also try to stay away from cellaring beers with adjuncts like coffee since, in my opinion, the fading of those flavors does the original beer a disservice.

DO NOT cellar hoppy beers. Hop-forward beers, with a few exceptions, taste awful cellared. That IPA you picked up at the store was intended for you to drink fresh. By all means, feel free to experiment, but that Bell’s Two Hearted that’s been sitting in the back of your fridge for four months is going to taste like crap.

These are some affordable, widely available beers that seem, in my and others’ opinions, to cellar well. Bonus points for labeled, yearly releases for allowing for the building of verticals.

With all of that in mind, there is some disagreement in the beer community over cellaring, so don’t just take my word for it. Googling “beer cellaring tips” bring up about a bazillion results, so go to town if you’d like more information. Beer Advocate has a good write up on cellaring here.

I’d also like your feedback. Do you cellar? If so, what is your setup like? What beers do you think do particularly well with a year or two on them?

4 thoughts on “Top 3 Tips to Help You Cellar Beer”