My last encounter with Green Flash left me less than thrilled by their Tripel, and honestly this is probably not the best for me to follow it up with. It’s another Belgian, but a Belgian Pale Ale infected with brett…  So this beer takes a bit of explaining to do.

First off what is a Belgian Pale Ale? Belgian pales first came about after World War 2 to compete with the lighter, less bitter styles from other parts of Europe. For a country most well known for ass kickingly strong tripels and quads the pale is their daily session beer.

Second question is what the heck is brett? Even people who have been into beer for years may not have heard of this. That is because it’s  historically viewed as a contaminant and introducing off-flavors. Though it is a common attribute in lambics and saisons, sour beers, which are growing in popularity and are somewhat of a current fad… they are also something I don’t particularly like.

Basically this style is something akin to an “infected” Belgian bud light. Time to find out what exactly this crazy thing is 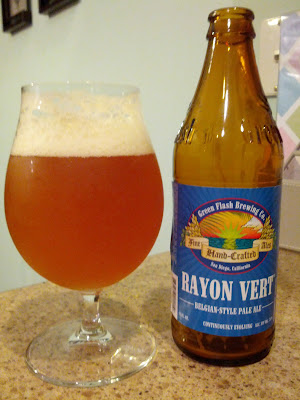 Yikes… took 8 minutes to pour this thing. When I popped the cap there was a pretty significant hiss of carbonation, so I wonder if this may have been over carbonated or something. Anyway after I got the bottle empty it poured a decent amount of head and a great burnt orange color. Cloudy does not begin to describe how thick this thing looks.

The smell is super pungent, crazily aromatic before you even get close. The smell makes me think of the Chiquita Banana ladies hat. Pineapple, grapefruit, orange, lemon, herbs, spice, pine a true menagerie of aromas.

The taste is similarly complex and flavorful featuring all the items mentioned above. It’s really a pretty good taste a bit overly complex which I didn’t really think was possible. I thought the brett would make it sour but that doesn’t seem to be the case at all, a bit tart but not sour. I digg this.

Mouth feel is another complex attribute of this complex beer. Crisp, clean, carbonated, and with a dry finish.

I didn’t expect to like this beer nearly as much as I did. I’ll admit the brett had me scared, I’ve never had a brett before (even though the Sierra Nevada/Russian River Brux is in my basement). I expected something viciously sour but got left with a bit of tartness. Of course left with a bit of tartness is a huge disservice to the awesome complexity of this beer. I don’t think I’d recommend this to everyone, it’s a bit crazy but it is tasty. There is also a nice bit of alcohol, you can’t really smell or taste it but you feel it after drinking the first half of the glass. I would have this again, I also plan on scoring another bottle to age for a year or so from what I’ve read that will kick up the brett. In case I’ve piqued anyone’s interest this should be available to any better bottle shop around the tri-state area.