Founders has become pretty well known for it’s stouts, especially the breakfast stouts. The Kentucky breakfast stout and Canadian breakfast stout are some of the most well reviewed stouts out there, usually referred to by their initials KBS and CBS. They’re highly sought after and frequently traded. Luckily, when they are available you can usually get some here in the Greater Cincinnati area. Also the Moerlein Lager house will have KBS on tap September 10th!!! Anyway, I’m wasn’t lucky enough to score the Kentucky or Canadian varieties but here comes the review for the plain old Breakfast Stout. 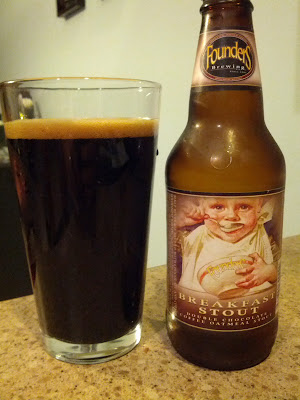 Not as heady as I expected it to be, really just a thin layer of brown head that goes no where fast. If you’ve ever been deep in a cave at night and turned off all the lights you can come close to picturing how freaking black this thing is.

Incredible malt aroma of chocolate and roasted coffee beans. Behind all this action is the slightest hint of the alcohol. I don’t drink Starbucks (or coffee) but if they served alcohol I imagine it would smell like this.

Tastes makes a similar combination hitting a bit stronger on the chocolate notes. After the initial pass over the tongue it lingers longer on the coffee flavors. You really pick up lots of the roasted malt flavor here. If you’ve been following along for a while now you know I’m relatively new to the stout scene so it’s kinda weird for me to have a beer that has almost NO hop flavor and only slight bitterness. Hold pls, letting it warm up a bit. OK we’re back. Woah coffee kicked it up a notch! Chocolate has become much more of a background flavor here, still hanging in there but over powered by coffee. Actually the coffee flavor has become a bit overpowering for my tastes.

I’ll be honest, I’ve never had a full bodied beer… at least not that I’m aware of. That said I’m pretty sure that this IS very full bodied. It’s thick and chewy though smooth and creamy. Does that makes sense? I’m not sure… but it’s true.

This is a pretty damn fine beer. Is it 100 level quality like Rate Beer & Beer Advocate give it? I think not, though I wouldn’t consider myself a well rounded judge in this area as this is like my third stout. But I enjoyed it, which is what really matters. Am I gonna drink it all the time, doubtfully. Do I want to drink the KBS and CBS? Certainly. Bottom line, would I suggest this to others? Of course!