I had never heard of Fat Heads or their Head Hunter until a new beer-friend hooked me up with a 6-pack of random bottles. When I found out this was from Ohio and that it had won this crazy number of medals I got pretty excited. Here are some of those awards:

But I don’t buy into the hype of awards all too much. From what I’ve seen there are loads of competitions out there and if you find one specific enough you’re guaranteed a medal in it. Bottom line though is that this beer has some clout and hype behind it, time to find out what I think. 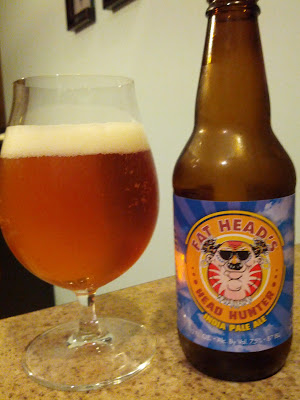 Beautiful pour with great dark orange color with a strong golden hue through out and amazing layer of off white head.

Pungent hop aroma with loads of orange citrus, grapefruit, and a bit of pineapple action.

Woof, that is an aggressive hop taste. The character of the flavor follows the nose quite well with some added earthyness. There is nothing sweet or balanced about this at all, just massive fruit flavors and loads of hop bitterness.

The mouth feel is sticky which I’m thinking may come from the hop resins. It’s light bodied though and has a nice long lasting finish… which kinda coats your tongue and is slightly unpleasant.

Late breaking update: The last sip of the glass was very strong in alcohol and super bitter.

This is a great IPA with lots of the west coast IPA style. I’d prefer a bit more malt to balance things out. One surprise is that it’s only 7.5% from the overall character of the beer you would expect something a bit stronger. Likely a result of the lower amount of malt used, another good reason for them to use more malt. But man, who am I to say anything this beer has won lots of awards and it’s great to have an IPA this amazing being brewed a few hours away up in Cleveland. This should be available at better beer sellers in the area, but may be hard to come by as there is very limited production.

After having this beer the wife and I headed to Cleveland for a previously planned weekend trip and I decided to add the Fat Head Brewery as part of our trip. We ended up having lunch there, it’s a nice brewery/restaurant but unfortunately the menu is full of highly unhealthy food. But we’re here to talk about beer which they have an excellent selection of, including their beers plus some from other breweries around the country. The beers and on top of their own were very interesting, to say the least, with lots of “additional flavors” which I’m not going to spend time talking about here because I wasn’t a fan of any of them. I also had 8 samples along with lunch so my judging facilities were quite muddled and mixed. It’s definitely worth a stop since you can get a sample of any of their beers plus 4-packs of Head Hunter!

Oh, and as soon as I saw Head Hunter this is what I thought.