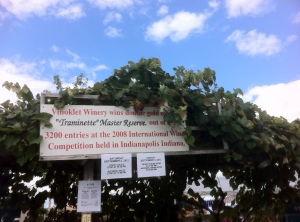 Going to wineries in Ohio has always struck me as being a lot like going to casinos in Indiana. It’s a pale imitation of the real thing that is only for the hard-core addicts. Rather than feeling transported to the hills of Napa it has always done more to remind me that I’m stuck in the midwest and trying to make the most of it. But sometimes a girl’s gotta do what a girl’s gotta do and on Saturday this girl had to get a pedicure with her mom and then go drink some wine.

Vinoklet Winery and Restaurant is located on 30 acres just off Colerain Ave. It is Hamilton County’s only working winery and a popular wedding spot as well so I am surprised it has taken me this long to visit. I have to admit the grounds were absolutely stunning. As soon as we pulled in I found it hard to believe that we were minutes from the endless strip malls, box stores and the ever-present mount Rumpke. Instead you see endless hills covered with grape vines and dotted with ponds. 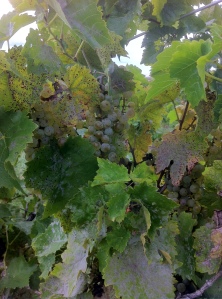 The annual Art and Wine Fest is apparently a pretty big deal because when we arrived they were already laying down straw so we could park in a muddy field and they would soon be using a shuttle to get people in from the afore-mentioned box stores. Undeterred by the crowd we quickly made our way past the art and straight to the wine.

I don’t know if this was due to Ohio’s crazy complex alcohol laws or a quirk of the winery or both, but you had to buy tickets to pay for all of the food and wine, you could only buy those tickets with cash, and no change was given from the tickets. Kind of a pain in the ass but don’t worry, there was an ATM charging huge fees in case you didn’t bring cash.

Once we got past the hassle of the tickets it was actually a lovely afternoon. The weather was perfect, the musicians were great, and the art was, well it was pretty typical of a summer festival. Pottery, jewelry , leather work and photography were all to be found. I have a huge respect for anyone trying to make a living by creating something and talking to the vendors was the second best part of the day, (I highly recommend Lily in Flux.) The first best part was buying a bottle of wine to share with my mom and my friend and drinking it on a hill while talking and listening to music. Being able to buy a bottle of wine and drinking it on the grounds was what really separated this from your typical summer festival and made it well worth any hassle to get to that point.

And as for the wine itself? I paid $5 to try their six standard wines, their award-winning premium wines were extra, and the of the six I’d say three were drinkable. Because of the high heat, grapes grown in the area tend to be sweeter and so I was not surprised that four of the six wines were very sweet, but I did enjoy their drier wines. Both Cincinnatius, the dry red wine made from the chanbourcin grape, and Tears of Joy, a lighter white made from the vidal grape, were quite enjoyable to drink as we walked the grounds. The Sunset Blush is similar to a white Zinfandel and even though it was too sweet for my tastes, I thought it was better than a typical white zin. And to speak in defense of small, midwestern wineries I will say that it was interesting to try wine made from grapes other than the big names we all know and love. Vinoklet serves food of varying degrees of formality depending on the day but if I were to return anytime soon it will be for their Wednesday night “Cigars and Guitars” event where you can get a spaghetti and meatball buffet, buy and smoke premium cigars and enjoy some acoustic guitar music while to sample the wine.