This year has already seen the guys at Rivertown release two of the four horsemen. Pestilence back in the spring and War in early summer (my review of War) now comes the third horseman representing Famine. First a little biblical background:

When the Lamb opened the third seal, I heard the third living creature say, “Come and see!” I looked, and there before me was a black horse! Its rider was holding a pair of scales in his hand. Then I heard what sounded like a voice among the four living creatures, saying, “A quart of wheat for a day’s wages, and three quarts of barley for a day’s wages, and do not damage the oil and the wine!” – Source Wikipedia

In summary the third horseman rides a black horse and hands out just enough wheat and barley to keep you alive, barely. Now for Rivertown’s take which comes from my interview with Rivertown General Manager Tom Hall:

The story of Famine is that he rides a black horse through town with a scale handing out barley and wheat, but not enough of either to prevent starvation, thus famine. The beer will be a Bavarian Hefeweizen with a low alcohol content. [Don’t worry too much about that “low alcohol” action this is no 3.2 beer or anything like that. According to Tom it’ll come in around 4.2% or 4.5%.] The low alcohol  is in order to achieve their goals of representing famine. To make sure this is still a good beer they made it with a fuller body. This was achieved with the right yeast and treating the mash in the right way to control the amount of fermentable sugar [which keeps the alcohol low]. Since Famine’s horse is black they added in a roasted wheat to give it a nice black color.

Ok, enough background on to the beer! 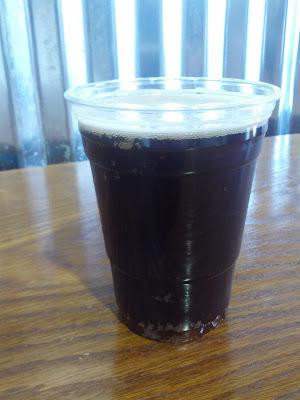 Pitch black color with some off white head. Head faded fast but a plastic cup isn’t really an ideal heffeweizen glass so don’t make too much of this.

Lots of roasted aromas and some wheat as well as banana esters mixed in as well.

Smooth and creamy taste with quite a bit of roasted flavor. Very low bitterness though it is still present. Some typical weizzen flavors as well with clove and banana esters. The flavor + low alcohol makes this a highly sessionable beer, but honestly I don’t think I’d have more than one or two.

Overall a good and interesting beer that does a solid idea of representing the concept of Famine on a black horse, but I wouldn’t want to drink a 6-pack of it. The beer didn’t taste too carbonated but holy crap did it give me loads of gas. I was burping like mad for a half-hour after drinking it. It achieves it’s goal of representing famine and I strongly recommend trying it since you may never see a black Hefeweizen again.

I had this on draft at the Rivertown Tap Room but that’s only a half-barrel so head down there soon if you’re anxious to try this. Otherwise keep an eye on store shelves in 2 – 3 weeks time (around October 10th).