From the horse’s mouth:

This oak-aged gentle giant has been gaining popularity over the past few years and is now available year-round.

For Burton Baton, we brew two “threads,” or batches, of beer: an English-style old ale and an imperial IPA.

After fementating the beers separately in our stainless tanks, they’re transferred and blended together in one of our large oak tanks. Burton Baton sits on the wood for about a month.

When enjoying the Burton Baton, you’ll find an awesome blend of the citrus notes from Northwestern hops melding with woody, vanilla notes from the oak. The wood also tends to mellow the 10% ABV of Burton, so tread cautiously!

It is quite the unique beer: an old ale mixed with an imperial IPA and then aged in oak tanks, Burton Baton brings the best of both beers together. You get the caramel and the raisin flavors from the old ale and the earthy hops from the IPA pair to form something much akin to an American barley wine, but slightly different. The oak comes through primarily in the form of vanilla; there isn’t much in terms of oak itself, which I suppose isn’t too surprising since it’s only aged on it for a month. 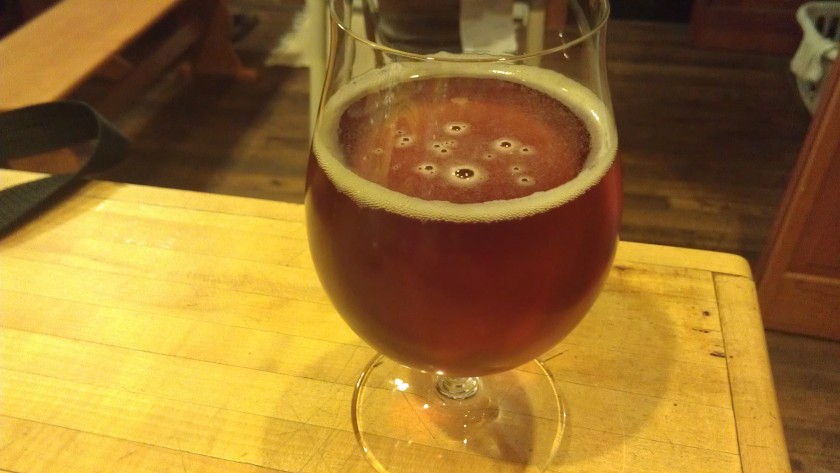 As you can see, Burton Baton is a little darker than your average IPA/DIPA due to the blending. It has a soft off white head that I wasn’t quick enough to get on camera before it dissipated. At 10% of so, this beer is suspiciously smooth, which not too heavy of a body and next to no indication of the ABV.

You should be able to find this at most better beer stores in the Cincinnati-area that carry Dogfish Head, though in reality this has been one of the DFH beers that seem to hit the shelves more sporadically. I’ve seen them equally often sold as singles and four-packs. Also, if you are interested, I understand that Burton Baton stands up well to aging as the hops fade and it becomes more of an English old ale/barley wine with time.