On a trip to Indy last year I stumbled across 2 Belgians from a brewery I’d never heard of before and scored them both. The brewery was Schlafly, which I understand is one of the bigger/better breweries in St. Louis (not counting he who shall not be named). The beers were Tripel and Quadrupel, it’s nice to occasionally find simple straight forward beer names. When I got home I realized I bought way too much beer to fit in the fridge and decided that it was a good time to get into aging beer. I didn’t start with any lofty goals I just went in needing more space for beer and hoping to keep them for as long as possible. Well, this one made it a year and more friends have joined the Quad.

I’ve gone into the history of Tripels a few times in previous posts so to sum it up. 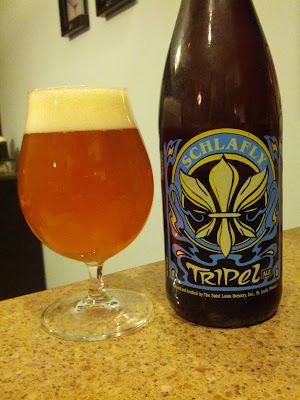 Pours a dingy golden brown color with a nice bubbly white head and some slightly hazy action going on around the glass. I don’t want dingy gold to come off in a bad way, just trying to describe the color.

Delicious aromas of sweet malts, citrusy grapefruit, fair amount of clove spiciness. There is also a presence of alcohol in the aroma, not too much but its in there after a couple whiffs. Overall a very enticing aroma.

Fantastic taste rocking all the Belgian Tripel spots in all the right places. Great sweet malt action which might be a bit sweeter than typical but I’m cool with that. The clove flavor spice steps it up here over what was in the aroma. Also more of that citrus fruit action. Just a bit of bitterness on the back end that is quite pleasant.

Smooth medium bodied mouth feel. Noticable, but not significant amounts of carbonation. Warming alcohol feeling that starts to kick ass after a bit.

I’m not sure how much of this is from the year in the basement vs. a fresh bottle of this but regardless I plan on buying this one again. You can pick it up in Indiana and Kentucky, sorry Ohio. I’ve heard good things about other Schlafly beers but don’t have any experience with them. Based on the Tripel I plan to change that!