It’s getting cold out (well, not today it’s 57), Christmas music is playing in every store, and winter ales abound. That all means the holiday season is upon us. Since this is QCD’s first holiday season and because I love shopping for beer and beer stuff I present the following post about beer gifts for yourself or the beer lover in your family. 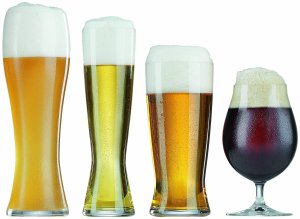 As soon as I thought of making this list this set of glasses was on the top of it. I was lucky enough to get this set from Spiegelau at the Beer Bloggers Conference and they have changed how I taste beer. The effect that the right glass can have on beer is becoming more well known every day but some people won’t believe it till they taste it. The set includes the ever versatile (and my most used) tulip glass, a lager glass, a pilsner glass, and a Weizen glass. I notice the biggest differences when using the tulip and Weizen vs. a shaker.

I love reading especially about beer and history. This is a spot where Cincinnati really shines, the beer history of this city is amazing.

First up is Mike Morgan’s Over-the-Rhine: When Beer was King ($15 on Amazon). I read this book back in the spring and loved it. It is full of great stories about Cincinnati history, people, and oh yeah BEER! Check out my full review of the book here.

Next in the Cincinnati history department is a new book about the life of Christian Moerlein: The Man and his Brewery ($20). I haven’t checked this out yet but am looking forward to reading it and will post my thoughts when I do.

Switching tracks from Cincinnati beer to beer in general, are the two following books.

Tasting Beer: An Insider’s Guide to the World’s Greatest Drink ($12 on Amazon) – I’m about half-way through this book and so far am loving it. It covers the history of beer, ingredients, styles, glasses, pairings and much more. You can look forward to a full review when I finish it, but I’m far enough through to say that I like it and encourage others to read it.

The Oxford Companion to Beer ($40 on Amazon) – I haven’t read this yet but REALLY want to and it’s on my own wish list this year.

Beer Advocate ($15/year) – Lots of people know about the beeradvocate.com site and check it out for quick reviews or info about styles but many I speak to weren’t aware there was a monthly magazine. I’ve been receiving this for about 2 years and look forward to it every month. It’s mostly short articles about various facets of beer or the industry. There is always an interview with a brewer and 2 – 3 pages of reviews of new beers. They also just released a digital version on the Google Play Store.

All About Beer ($20/year) – I’ve been getting this for a while as well. I prefer Beer Advocate in style and content but All About Beer is still a great magazine to read.

Beers not bombs bottle opener ($15) – I think this is a really cool idea. They take cables from old nuke launch silos, melt it down, and turn them into bottle openers! Plus 20% of their profits go to peace organizations. Kinda hippyish but you always need a bottle opener so you might as well have a bad ass one that goes to a good cause.

Growler on board ($30) – Being a 1-growler man I personally have no use for this… yet. But if you’ve ever tried to keep a growler upright in the passenger seat on the way home from the brewery you already know the value this brings.

Homebrewing start kit ($50 on Amazon) – I’m no home brewer nor do I have an interest in becoming one. But this is an ambition that is shared by many beer enthusiasts so I think it’d make a great present, one which I’ll be giving my brother-in-law once I convince his wife it’s not a horrible idea 🙂

Prices on this could vary tremendously. Some quick ideas would be getting a DD to spend a day driving from Rivertown to Mt. Carmel and end with dinner at the Moerlein Lager House. A step up would be a stop in Columbus for lunch in the brewery district there then heading on to Cleveland for Fat Heads & Great Lakes. Further out would be a trip to Three Floyd’s and a night in Chicago. From there the USA awaits you can hit the  Denver-Longmont-Ft. Collins area or head down to So.Cal and see Russian River, Stone, Lagunitas, 21st Amendment and all the other awesomeness around there. A personal favorite of mine that I can speak to from experience is Asheville, NC. I prefer mountains over cities and Asheville is nicely nestled in the Appalachians. They don’t have any big breweries that are well known around these parts but boy do they have a lot of little guys! If you’re in a higher income bracket than myself the world opens up with London, Belgium, Dublin, and all the old brewing cities in Germany.

Right, that stuff that we talk about all the time and drink most of it (remember to exercise moderation). I’m not gonna say what to get because everyone’s tastes differ but I don’t think anyone would be disappointed to get a new brew as a gift. If you have no idea what to get your family member then I’d suggest a gift card to one of the bigger stores that sell good beer like Jungle Jim’s or Party source. Other places may have gift cards but I’m not sure.

If you’ve got no idea what beer to buy and don’t like giving gift cards then I’d suggest a Beer of the month club ($40/month). There are a lot of different websites out there offering varying packages and prices but the gist is all the same. They send you new beers every month. From the poking around that I’ve done online, halftimebeverage.com is what I would go with but I encourage you to shop around and decide what works for, and interests, you best.

That is a list of stuff that I like or want or think others might want. But what do you want under your tree this year?

3 thoughts on “Gifts for the beer lover in your family”