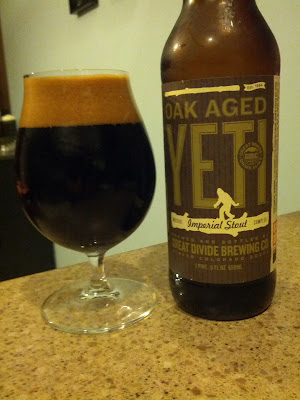 Umm perhaps the least enticing beer I’ve ever seen. This isn’t black, it’s super black. And the head, oh man… it’s a dark tan/brown combo that is ultra thick and going down slow. No… it’s not a dark tan/brown head. It’s mud, yep looks just like mud. As the beer drops down the head leaves a nice lacing on the side of the glass.

The smell shows off the vanilla flavoring it gets from aging in the oak barrels. There is also plenty of roasted coffee malt and a bit of alcohol as well.

Powerful coffee taste with loads of roasted malt bitterness and more than a hint of vanilla sweetening things out in the background. Quite a bit of rich dark chocolate flavors as well. The ABV makes itself abundantly clear here.

Medium body and decently creamy mouth fell with a bit of carbonation and alcohol warmth. I imagine on a nitro tap this thing would be even creamier.

So the Irish dry stouts weren’t enough to kick it for me and this is way too much. I feel like there are a bunch of complex conflicting flavors going on. The roasted coffee bean bitterness, dark chocolate, and vanilla would all be nice separately but together it’s a bit overwhelming. At 9.5% this really isn’t that strong of a beer but the alcohol makes itself much more well known and seems to be much stronger than it really is. I’ll be passing on this beer next time I see it but looking for the standard Yeti.