When I first heard about this beer I was very excited to try it. Long time readers know I love any Belgian or Belgian-style. Second to that is high gravity double/imperials. I’m not as huge a fan of IPAs as the average beer drinker these days appears to be, but I still enjoy the style. So a 9% Double Belgian IPA (not a Belgian Double IPA, see videos below) is right up my alley. Sadly life has gotten in the way and it’s taken me longer than I would’ve liked to acquire a bottle and review it for you all. this was released in September after all. The background on this is that Blank Slate Brewing Company (more info on BSBC from my interview with Scott LaFollette, the head brewer, here) teamed up with Triple Digit Brewing to create a new local collaboration brew. 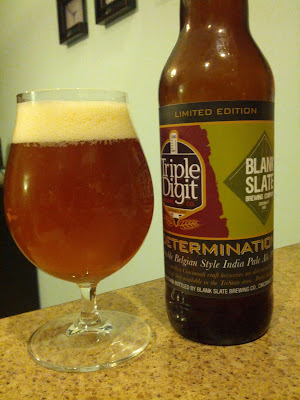 Fills the glass with a dirty golden brown that contains hues of amber as well. Lots of clarity here with an ivory-white head. The head starts off thick but simmers down to a few bubbles here and there and leaves a nice lacing on the glass.

Very pungent citrus aroma from the hops backed by a nice floral arrangement coming off the Belgian yeast.

Interesting flavor. The Lemon/orange citrus and flowery esters kind of clash over top of pepper and clove spiciness and a light malt body. The taste is very sweet with almost no bitterness at all to speak of. As I said initially, this is a very interesting flavor, maybe not the best but definitely worth seeking out.

Overall I don’t feel that this lived up to the hype I built up for it in my mind, which is totally my fault and not the beers. Let’s be clear, this is a great and interesting beer. Scott LaFollette points out in the videos below that this is a double Belgian IPA, not a Belgian Double IPA. They doubled up on the Belgianess of it then added in the hops for the IPA and that clearly comes out in the flavor profile.

As far as current availability goes my soon-to-be-brother-in-law picked this up for me at The Party source and according to their website they have 104 bottles left. For more places I emailed Scott while working on this post and here is what he had to say:

Here is a list of all places that got bottles.  I can’t say for sure who still has inventory, but these are all the people who got some.  There is very little draft left and it isn’t currently pouring anywhere, but we occasionally put one out here and there…

Lastly, here are two videos that were made by BSBC & Triple Digitand posted to YouTube about this beer. There is supposedly a third but I’ve been unable to find it.

And here is part 2, I guess I can’t embed it into the post for some reason.