Getting back on track with The Winter of my dark-content I built my own 6-pack of stouts & porters at Belmont Party Supply in Dayton. I had Left Hand’s Nitro Milk Stout last night and the mouth feel was insanely awesome, but otherwise not to amazing. It left me a little disappointed with stouts in general. Tonight however that all changes as I compare Sierra Nevada’s Stout to their Narwhal Imperial Stout. 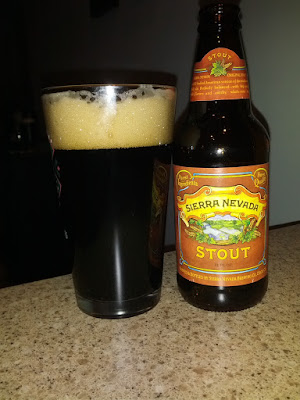 Pours an extra dark brown, but not black color with a thick topping of lightly burnt tan head. The head starts thick as all get out but begins to descend into a lumpy ice cream float sort of texture before settling into a thinish layer that hangs around. Lacing is thick and heavy all along the sides.

Flavor matches up pretty well with the aroma, especially in the “very delicious” part of things. Chocolate is pleasant and coffee is just a hint. That roasted malt kicks in a bit heavier and brings with it a fair dose of bitterness. Somewhat to my surprise there is a fair bit of hop earthiness that lingers on your taste buds for quite a while.

Medium body with slight carbonation. Comes off feeling a slightly oily and not super creamy. The mouth feel is the only down side to this brew but I bet it’d be fantastic on a nitro tap.

Without any doubt this has been far and above my favorite stout so far. All the color, aroma, and flavor you’d expect in a stout and all cranked up to a delightful level. It could have a bit more alcohol to it, but then that’d cut back on it’s sessionability. I can’t wait to have more of this, hopefully on draft and more hopefully on nitro! In bottle form this should be available year-round and at most better beer sellers.

On to stouts bigger, spikier, brother. 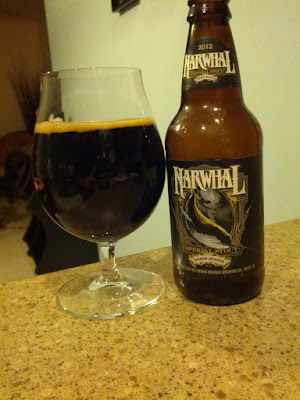 Extra dark black with a thick layer of head that disappeared quickly. Thinking I may have poured it wrong as I was expecting a much thicker, longer lasting, head.

Strong coffee aroma with cocoa (cocoa, not chocolate) and lots of roasted grain.

Much more cocoa in the flavor and lots more roasty grain which brings out some bitterness.

Heavier body with a slick mouth feel and loads of warming alcohol.

Slightly disappointed in this brew. I was hoping for the stout from above with more of everything… kinda the basic idea of “imperial”. This isn’t a bad beer by any means, just another one where it didn’t live up to the expectations I’d built up in my mind. Though it is improving as it warms up.