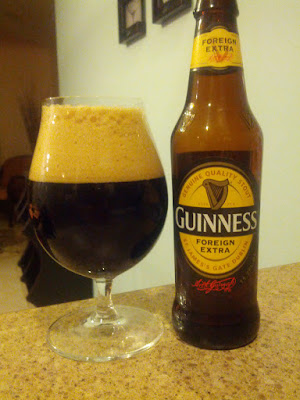 Pure blackness topped with some of the thickest darkest tan head I’ve ever seen. I do aggressive pours in general and clearly went far to aggressive on this one. That head hung around for a very long time but what was beneath it was fantastic.

Lots of roasted grain and alcohol aroma gets all up in your nose mixing with some sweetness that I can’ quite identify, but I’m guessing is caramel.. There is a small bit of hoppy aroma as well, but not too much.

Like most stouts the flavor is malt forward with roasted malts bringing in some bread & bitterness. The amount of alcohol I’m getting is a bit surprising since it only clocks in at 7.5%. There is also a slight balance brought in by some hops that come off mostly with earthy flavors.

Great beer that is far better than the standard Guinness. It’s not about to convert me to being a stout-fanatic and I still prefer Sierra Nevada’s Stout. Still, if you see this around grab it. You should be able to find it at any better beer seller as well as Kroger Marketplaces… but check the date code as follows:

The lot code will be listed as a number starting with L followed by four numbers, such as L1244, with additional digits.  This would be the 1st of September, of 2011.  In this example the first 1 is 2011, and the 244 is the 1st of September using the Julian date calendar in which each day is sequentially numbered, i.e. January 1st is one, the 2nd is two, and so on.