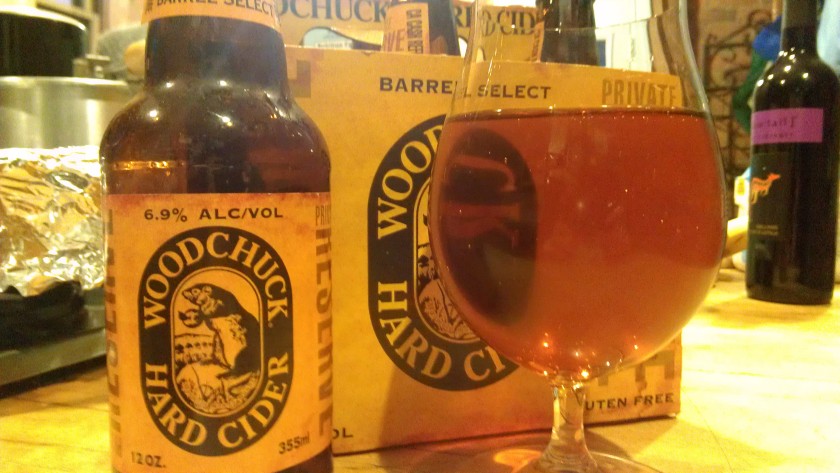 It’s kinda shocking to me that you’re about to read a review of a mass-produced hard cider from yours truly. For one, I’ve never been a sparking cider fan. I thoroughly enjoy normal cider, especially mulled and with the addition of spirits, but cold, carbonated cider? No, thank you. Even if I were going to forego my other, preferred alcoholic carbonated beverage choice and try a hard cider, it certainly wouldn’t be Woodchuck. God know, with all the meaderies and cider makers popping up now, we all have our options.

But, still, we find ourselves here. So, why did I buy this from the gas station down the street from my house I headed to initially to buy a six-pack of beer? One sentence (or clause if you want to be a grammar snob about it). “Aged in Kentucky bourbon barrels”. When It comes to barrel aging things, particularly beer, I am silly for it. Barrel aging cider just seemed like some Dr. Frankenstein’s monster type creation that I had to try. Like Dr. Frankenstein though, it seems like I would have been better off leaving well enough alone, but I suppose that’s getting the cart before the horse.

At $10.99 (I think) a sixer, I was suspicious out of the gate. I’m not sure why, but I just expected it to be cheaper. If anything, this is a very “pretty” drink. Effervescent and crystal clear, it pours just like the amber of a bourbon. Call me biased, but it was strange pouring a carbonated beverage out of a bottle and it not forming a head. Bubbles, yes; head, no. Don’t mind my crappy picture above. It looked a lot better in the glass than it looks there.

The smell is sweet, sweet, sweet apples with some vanilla; maybe a teensy-tiny bit of oak; and, strangely enough, a ton of maple syrup. I have no idea where that came from, but it was the dominant force in the nose. The taste largely followed in those tracks: cloying apple sweetness mixed with nebulous, somewhat muddled barrel characteristics. AND MAPLE. I can’t stress that enough. Perhaps the strangest thing was that I got no bourbon in either the nose or the taste. The body is light, with prickly bubbles while cold and a lifeless, watery feel when warming (they recommend to drink it at over 50 degrees).

Overall, I don’t like it. To say it is a disappointment would be going too far since I didn’t have too high of hopes to begin with, but I do feel like I wasted $10.00. I suppose ‘dems da breaks for a curious drinker. If this was a dry cider, I think whatever barrel qualities were there would have shined through better, but this saccharine mess isn’t salvageable by the best barrels in the world. Summary: though a curious creature, Woodchuck Barrel Select, to get biblical, you have been weighed and you have been found wanting. Hopefully some of my Christmas guests can finish those other five bottles.

One thought on “Review: Woodchuck Barrel Select is a sugar-sweet glass of “bleh””