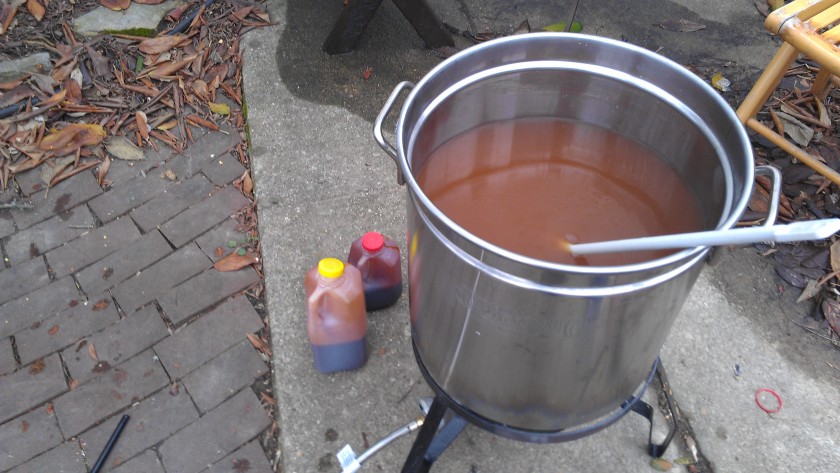 [See Part 1 of the review for this kit here.]

After unpacking it earlier in the week, I settled on last Sunday to brew up my Midwest Supplies Ferocious, a Surly Furious clone. Everything went swimmingly, which (even though I’m an extract brewer) isn’t always the case. Split the malt extract between half at the beginning of the boil and half with ten minutes remaining to cut down on caramelization of the syrup and it ending up too dark. I also messed with the hop schedule a little bit to account for the fact that this was a “no chill” batch. I’ve had good luck with the no chill method over my last few batches, but this was the first hoppy beer I’ve done with it, so we’ll see how it works.

Started with 5.75 gallons of water, which at the end of the boil was just about 5 gallons on the dot. Hit 1.065 for my gravity, which was, again, right on the dot. If it ferments to a finishing gravity which I am hoping for, this will end up at a nice 6.5% ABV. It’s currently bubbling away in an ale pail at 66 degrees. I’ll test it’s gravity this weekend and once again a few days later and, if it has fermented to where I want it to be, the dry hopping will start.

There is one thing I wanted to discuss before I signed off. That is the use of Fermcap/foam control/whatever your homebrew store calls it.

Because I am still getting a handle on my propane burner, I about 50% of the time boil over my wort. It always irritates me for several reasons, the two most important ones being 1) it’s a waste of wort – if that wort is on the ground, it’s not going to be made into beer; and 2) it makes me paranoid. Brewing is supposed to be fun, but when I’m standing over my brewpot waiting for the hot break and it to start to foam up, it’s nerve wracking. I’ll get better at managing it, but right now it’s not one of my strong points.

Enter foam control. This cheap ($3.50 for a small vial that will last you for quite some time) and readily available. One to two drops per gallon will essentially eliminate the chance of boil over by reducing the surface tension of the wort. I don’t entirely understand the science of it, but it worked like a charm. I boiled it hard to test it and it never had a chance of boiling over.

The foam control can also be used in fermentation to prevent blowoffs (again, one to two drops per gallon). This is immensely helpful if you’re boiling or fermenting in a container that is not much larger in volume than the wort you have on hand. I used it for fermentation, as well, and while I have vigorous airlock activity, there is absolutely no krausen being produced at all. Pretty darn cool. Provided it doesn’t make my beer taste disgusting or having any other negative side effects, this stuff gets my highest recommendations.