Cincinnati’s Beer Week officially kicks off this Wednesday with a party on Fountain square and a special taping of this years Cincinnati Beer Week collaboration beer, Embree’s Northern Dark Baltic Porter. Starting last year all the brewers in Cincinnati got together to create a special collaboration beer. This year’s list of contributors includes; Blank Slate, Christian Moerlein, 50 West, Great Crescent, Listermann, Moerlein Lager House, Mt. Carmel, Rivertown, Rock Bottom, Sam Adams, and Tripel Digit. Kind of an odd list if you think about it, Moerlein is on there twice, Great Crescent comes in from Aurora, In but not Quaff Brothers (Bellevue, Ky) or Cellar Dweller(Morrow, Oh)? But I digress, regardless of who got in and out this is an awesome list of Cincinnati’s breweries. They all got together to decide what to make and it was eventually made at Rivertown. In case you’re curious where the name came from, it’s a history lesson in itself. David Embree opened the first brewery in Cincinnati in the long ago of 1812 so this beer is a tribute to him.

Before we get to the review I want to introduce everyone, including myself, to the Baltic Porter style. The Baltic States are in between England and Russia and in turn the Baltic porter is in between an English porter and a Russian imperial stout. The malt profile and flavor is that of a English porter but with a kicked up alcohol content from the Russian Imperial Stout. Having never had one before I’m excited to try this style as it appeases one of the complaints I’ve made regarding other porters, that I wished they were a bit stronger. 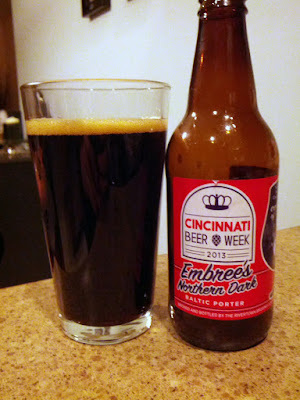 Pours an oily black until I hold my phones flashlight up to it and I realize it’s an extremely dark amber brown. There was a thin layer of brown head right after the pour but it was gone by the time I sat down on the couch.

Very malty aroma with less roasted aromas then I was expecting from the color. There is some sweetness that I can’t quite place from the aroma but I’m thinking it’s caramel, just because that’s a typical malt aroma.

Taste brings some bitterness forward blending with loads of malt and what is definitely caramel/toffee sweetness. It’s a nice and subtle flavor that reminds me of many other porters, in a good way. That 10.6% is no where to be seen in the flavor at all, I would guess it’s around 7ish based on the taste.

Medium bodied mouth feel with some slickness that lingers on your tongue.

Overall a very nice beer that doesn’t quite bridge the porter/stout gap but does succeed in bringing the strength of most stouts to the flavor and profile of a porter. I really enjoy the way the alcohol is at play here, not to much aroma or flavor giving it away but once you get through the bottle you definitely feel it’s effects.

Anyone have any ideas how this may change over time and if it’s worth aging?

As far as availability on this beer goes it should be in all area better beer sellers now and for the next few weeks. Most places are only selling the 6-pack but Dutch’s busted them out to single bottles. It’s also on tap at quite a variety of places around town.

P.S. As I said initially Cincinnati Beer Week begins this week and culminates in Cincinnati Beer Fest next Friday and Saturday! I recommend going Friday night and getting there early as Saturday night often turns into a massively over crowded drunken mob.