It’s easy to tell the difference between a stout and a Helles lager, but an imperial stout vs a stout vs a porter gets trickier. On top of that many brewers are equal thirds beer lover, mad scientist, and nerd. These things have led to the creation of the Standard Reference Method, abbreviated to SRM.

SRM is simply a scale for measuring the color of a beer. The color of the beer is the 2nd or 3rd thing we see from the beer; after bottle/tap handle and before/after/same time as the head. This leads to color playing an important role in our first judgment of the beer. When I pass a stout to my wife she almost always says “oh no, not another dark beer” but she’s getting better about that. On the other hand, many people get excited about a nice amber IPA or a straw-colored hefeweizen.

There is some complicated math and science behind finding the specific number for each beer, but next time you’re at a bar trying to impress some new friends you’ll be safe enough knowing that 2 is yellow and 40 is black.

What Contributes to the Color of Beer?

In order to make beer grain is malted, allowed to germinate then having that stopped, and part of the malting process includes drying the grain. The length and intensity of heat when drying will change the color of the grain. This is a picture of Marris Otter malt which dries at a relatively low temperature.

Versus the darkness of heavily roasted Carafa malt shown below dried over high heat. 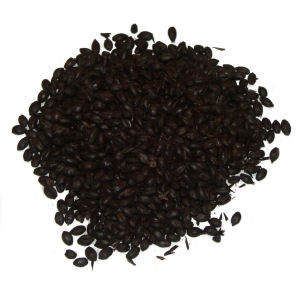 These different levels of temperature and time change the Lovibond rating (color of grain) of the grain which in turn changes the SRM of the resulting beer.