The Party Source in Bellevue, Kentucky is having a special on moonshine (or as classy people like to call it: white whiskey) in their store this week and  its a great chance to try out some unaged whiskey if you’ve never had the chance. I picked up a bottle of Devil John Moonshine, a brand I had the pleasure of tasting while visiting Barrel House Distillery in Lexington a few weeks ago and I was intrigued enough by the taste that I wanted to experiment with  making a few drinks with it.

As many of you already know, whiskey gets most of its flavor and all of its color from the barrels during the aging process. Most of the distilleries who are making white whiskey specifically to sell and drink use a different recipe than they do for the batches they will be casking and this is the case with Devil John, which is a mixture of corn and sugar. The smell reminds me of straw but the flavor didn’t quite match up with that. Sugar with a slightly grainy flavor and a mild aceton burn on the finish. It is much sweeter than other moonshine I have tried and considerably smoother. That is probably because most of the moonshine I’ve tried has been the kind that you can buy in a mason jar out of the back of a pick up. But even compared to other professionally distilled moonshine Devil John is sweeter and smoother. Other than corn, sweetness, and alcohol I don’t pick up on a lot of individual flavors. This isn’t something I could ever see myself sipping neat and given the choice between a white whiskey and one that’s done it’s time inside an oak barrel, I will take the whiskey every time. But the taste was different enough from vodka or white rum that I though it might make for some interesting mixed drinks. 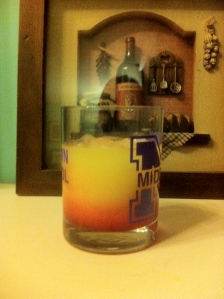 For the mixed drink I tried the recipe that Barrel House recommends for their moonshine, a Kentucky Moonbow. Basically this is a tequila sunrise but made with moonshine. In a highball glass pour 1.5 ounces Devil John, 4 ounces orange juice and 1 ounce Grenadine over ice and drink with a straw. Personally this had way too much mixer for my taste and with all the juice I might as well have been using Burnett’s vodka.  I didn’t finish it because all the Grenadine in the bottom. But it was a pretty drink.

Overall I think that white whiskey is something that is interesting to try but not likely to become a go-to drink for many people. The romance and history of moonshine are compelling and this was nice to try but I don’t see this earning a permanent place in my liquor cabinet. Maybe some of the mixologists out there can recommend a drink that will showcase the unique flavor of moonshine a little better than the Kentucky Moonbow. In the meantime I think I will be patient and wait for my whiskey to grow up a little before drinking it.

One thought on “Devil John Moonshine”