Dutch’s (facebook page) is easily my favorite bar in town, but calling it a bar is really a disservice. It’s a bottle shop, amazing craft beer bar, and larder. So basically it’s full of great beer to drink there, great beer to take home, and great food to go with your great beer! Multiple times a week they have special tap takeovers and last night was no different. MadTree is up in the house with Batch One, Identity Crisis, and PyscHOPathy!

First off a bit about Dutch’s. Like I said it’s got a killer combo of being a bar + bottle shop. Many times of year you can have a beer, decide you like it, then buy a bottle to take home. To be honest, though the bottle shop kinda sucks, not their quality mind you, just deciding what you want. It’s one big window that’s exposed to the elements. 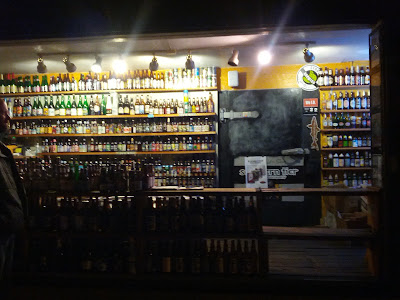 Not so bad in summer, but pretty horrendous right now. The downside outside is that it’s a lot harder to take your time and browse, study bottles, and Google different brews. Sometimes you’re about 10 feet away from the bottle and there is usually someone standing behind you in line. Counter to that is the fact that they have an outstanding quality of bottles. If there is some crazy awesome rare beer that is distributed in Ohio there are really good odds that Dutch’s has it! 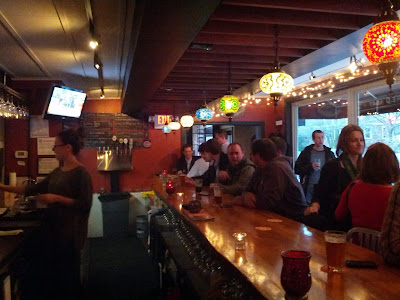 Heading inside to the bar I’ve never been disappointed by their tap selection. I’m told they have great wine as well but know nothing about wine so I won’t speak on that point anymore than I have. Again a downside here is that this place is TINY. If anything decent is happening your probably standing, if anything awesome is happening you’re standing slightly uncomfortably close to your friends and very uncomfortably close to strangers. But the beer is always worth the hassle. Also in nice weather they have a sweet patio out back which lessens some of the load of the bar area. 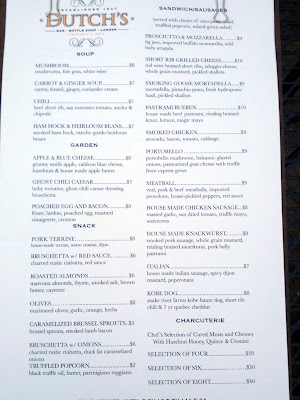 Moving on to the food I’ve only eaten here a few times but it’s always been delicious.  I’m no foodie and leave that kind of blogging to others but damn do I love their Orzo pasta salad, I could down gallons of that stuff. Really it’s just nice to be at a great bar that has great food to fill your belly and help you keep drinking!

Right, so that is Dutch’s bar, bottle shop, and larder. If you haven’t been there go check it out… just be prepared to hunt for parking. Now let’s move on to some MadTree!

I was outside by a smokey fire drinking multiple beers and eating, so I’m not going to give these a full review just some basic info and quick thoughts. I was also able to talk to Kenny for a few minutes about these beers and one burning question.

Black(ish) IPA that could really use a lot more hops. Per Kenny, this beer will be dry hopped a lot more in the future. They’re currently using Simcoe hops but plan on moving to Amarillo.

[Pronounced psych-hop-a-thee] – Excellent hoppy IPA that is very deceiving in appearance. It pours a lighter brownish yellow and has a pure white bubbly head. But the flavor is intense and very forward with bitter hops!

Batch One (aka Happy Amber)

Named for being their first batch on their production system. Nice amber ale but nothing earth shattering here. Next time this is brewed it’ll be called Happy Amber so look for that coming soon and don’t get upset if you can’t find Batch One anymore.

When do you expect your cans to be out? – Early April via Cavalier distributing.

That’s all for today folks, look for MadTree taps all around town and check out their Facebook page!