In the ever increasing number of “seasons” in beer, we find bocks and doppelbocks coming out during late winter/early spring. Like most lager’s these beers started in Germany, bocks in Einbeck then later doppelbocks came out of Munich, dating back to the mid-1600s. Traditionally monks would drink this “liquid bread” during the long fasting days of Lent.

A few words about goats. The link between bock beers and goats has been somewhat mystifying. Most bock, or doppelbock, beer labels have goats on them, and Cincinnati’s own Bockfest has a giant wooden goat, but why??

There is no firm, conclusive evidence but the anecdotal stuff is mostly summed up as follows: as I mentioned earlier, the town of Einbeck is the supposed origin place of this style of beer. Back in the day, it was likely just called Einbeck style or something like that. Well, some folks in Munich probably had too many beers of this style and started slurring Einbeck into einbock. In German bock means goat. Anyway, that’s how I like to imagine it went down but, just like how many licks it takes to get to the center of a lollipop; the world may never know.

With Emancipator, Moerlein is presenting us with a doppelbock, or double bock so we’re drinking two goats. Moerlein first released it back in 2008 to celebrate the 75th anniversary of the repeal of prohibition. Now it’s released mid-February every year wherever Moerlein beers are available. Now let’s kick this review off with a traditional Bavarian toast when drinking doppelbocks. Salve, pater patriae! Bibes, princeps optimae! (Greetings to you, father of our country! Drink, best of all noblemen!) 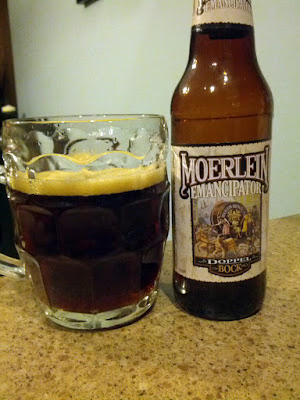 Fills the mug with a nice dark amber brown brew topped off with a light toffee colored head.

Dark roasted/smokey malt aroma with tinges of earthy hops. There is a bit of sweetness in the background that reminds me of caramel, but it’s a bit too weak to really pick up on.

Nutty and roasted flavor are showing off the malt but almost no hop flavors to speak of. This isn’t necessarily a downside as the style isn’t a hoppy one, just fair warning for any hop heads. Other flavors include some caramel and toasted bread which round out the pallet.

Creamy medium bodied mouthfeel with plenty of carbonation to bubble about on your tongue.

Great beer? Heck no, but not a bad one and definitely an interesting style to try once a year. This should be available in the city and definitely at the Lager House. Don’t buy a 6-pack unless you love bocks or plan to share with friends, but do buy at least one bottle/pint to try this out.