Last year was the first year for Rivertown’s Brewmaster Reserve series and focused on the muched hyped but ultimately disappointing Mayan apocalypse by way of the 4 horseman Pestilence, War, Famine, and Death. This year the Brewmaster Reserve is being kicked off with the Infinite Shilling wee heavy Scotch ale. I stopped by the tap room last night to try this out and was able to talk to Tom Hull, Rivertown’s general manager, about this beer. He provided lots of excellent information on brewing a Scotch ale for any ambitious home brewers.

The Brewmasters reserve series this year is gonna be the Big Ass Beer series, everything is going to be over 10%. Starting with a Scotch Ale, the second will be a Belgian quad, after that will be an Imperial American pre-prohibition pilsner, then the fourth one will be an imperial oatmeal stout. If I do my job right it will basically be a just under 12% oatmeal raisin cookie.

For the first one we did the Scotch ale mostly because at home I brew low alcohol content beers. When I brew something strong it’s a wee heavy scotch ale, that’s because my sister lived in Glasgow so I’m very influenced by Scottish brewing. With this beer I wanted to take a different track then most American brewers do. Scotch ale is more an american term then a Scottish one, the Scottish call it a wee heavy that’s why we say we heavy on our tap handle.

The American approach is to mimic the flavors of a traditional scotch ale by using a variety of specialty grains, but 9 times out of 10 will give it a residual sugary sweetness. The Scots don’t use specialty grains in their beer, they’re primarily single malt beers. They don’t use a lot of smoked malt  because their maltsters fuel their kilns partially with peat because it’s a cheap fuel source. So the tiny bit of smokiness in a Scottish beer is because peat was a fuel source. A big problem I have with American scotch ales it they’re frequently overly peaty, so we used a combination of peat smoked malt and cherry wood and only a small amount of peat smoked malt. Beyond that it’s nothing but base malt, there’s no specialty grain except for those two very small additions.

The flavor is achieved by taking your first runnings, with the most concentrated sugar, then you start boiling the hell out of it. So on our setup I had to do two mashes for 1 batch to get that nice concentrated wort to start the boil. Then we remashed and sparged after we’d been boiling for about 2 1/2 – 3 hours on those first runnings. Boiling that wort creates melanoids, similar to the Mylar reaction in cooking almost like caramelization but not quite, even if you beer finishes out with a dry gravity it’ll still have a nice significant body to it without being sweet. It’ll be incredibly malty, full bodied, but not cloying sweet at the same time. Another misconception is a lot of [American] Scotch ales turn out extremely dark, because the use of specialty grains, a real wee heavy should be in similar color to a red. So I gave it another 2 hour boil once the full batch was in the kettle to make sure we got that color and really developed the flavor. There is only 1 hop addition, just the bare minimum amount of hops needed to balance this beer out. After that we fermented at a color temperature, I did that because Scotland is a cold place and Scottish ale yeast likes to ferment at a colder temperature I did that to keep it smooth avoid getting too much alcohol heat. Not really a way to avoid getting any, so far but I’m gonna work on that by the end of this series I swear I’ll manage to do it. But we barely got any on this, at 10.8% is really nice. These are meant to be really smooth beers.

For the name of the beer I went with Infinite Shilling because, even for a wee heavy, this is a really big beer. So I thought it’d be fun to follow the naming scheme [see further down] all the way up because it is such a big beer. The goal I’m trying to convey with this is that as far as brewing a wee heavy, at least in the state of Ohio because the alcohol limit laws, you’re not gonna go further then this. My goal was to make the best wee heavy I could, and if I’m making the best one I can then that’s the name I’m going with.

This year the brew masters reserve is entirely draft, we had a lot of people complaining that they couldn’t get kegs of it and with each one we ended up with cases [of bottles] left over [the tap room has 6-packs of War for $9.99]. I just want to make sure people get it and get to enjoy it. We want you to go to the bar and enjoy this with people.

The name of this beer refers to the shilling system used in 19th century Scotland. Shillings were a form of currency in Scotland and beers would be categorized based on their gravity or alcohol by volume (which is kinda the same thing and will be my next Learning About Beer post). So a light beer (under 3.5%) would be 60 shillings, heavy at 4% would be 70 shillings, export was 5.5% and 80 shillings, finally Wee Heavies were over 6% and came in at 90 shillings. Per Tom Hull the wee heavies were so “heavy” they were sold in wee little bottles Note that these classifications don’t apply just to Scottish style ales but all beer in Scotland at the time. Also pretty much any “Scottish Ale” from an American brewery is apt to be a Wee Heavy. 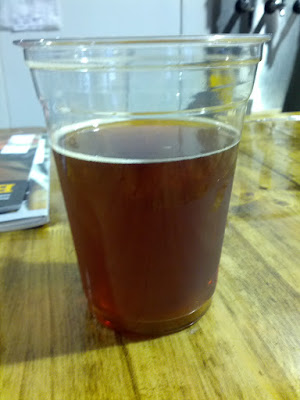 Very malty smell with hints of caramel, smoke, and peat. Slight hint of the alcohol to come.

Taste follows the aroma with loads of malt being sweet but not overly sweet. There is almost no hint of hops on this beer which is quite delightful for a change. Followed up by a very slight smokey flavor.

Availability wise this, as mentioned earlier, is draft only and all the kegs are all ready sold. One sure place to get it today is the Rivertown tap room, no growler fills here though other places may vary on that. It will also be available at the following locations at some time in the near future, so keep an eye out for the tap handle or just call and ask! Many thanks to John Lane from Stagnaro for the following list: 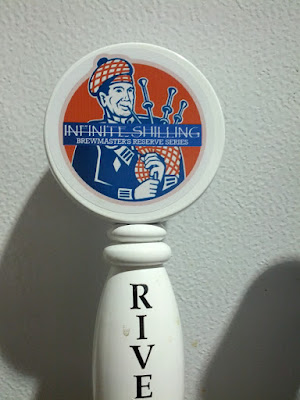 Keep an eye on QueenCityDrinks.com to learn about the next Brewmasters Reserve as soon as it’s released. I’m really looking forward to that Belgian Quad!