This week I’m trying two different stouts from a company that mostly makes super hoppy beers and one incredibly rare stout (not one of the two I’m having). For the unfamiliar Three Floyds is a regional brewery in Munster, Indiana which is sadly on the opposite end of Indiana from Cincinnati. Three Floyds (aka 3F aka FFF) mostly produces IPAs and pale ales with lots of extra hops, beers like Zombie Dust, Alpha King, Arctic Panzer Wolf. On the flip side of that is the “legend” of Dark Lord, a Russian imperial stout released 1 day a year in a massive festival known as Dark Lord Day. I say “legend” because Dark Lord is either the greatest stout some people have ever had or an overly sweet soy sauce substitute. Another thing backing that legend is that you can trade it for just about anything online.

Last night I had 3Fs’ Moloko milk stout. Milk stouts (aka sweet stout) are so named because they contain, wait for it… milk! Shocking I know, well actually they contain lactose which is essentially the same thing. So any lactose intolerant folks should avoid milk stouts. What does milk add to a beer? Unfermentable sugars which result in a sweeter taste and creamier bodied brew. 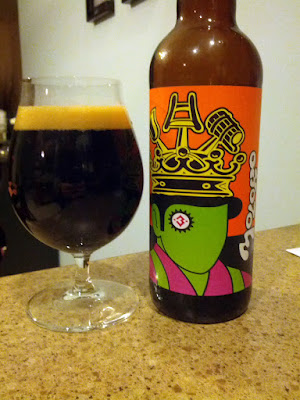 Great tan head that’s about a pinky thick atop a super black oil slick of beer. Very enticing appearance for a stout.

No real strong aromas to speak of, but what there is is sweet chocolate and roasted malty action. No sense of the alcohol or any hop action to speak of.

Sweet flavor with a mixture of smoke and dark chocolate. I imagine this is what melting pure dark chocolate and making chocolate milk with it would taste like. Also a minuscule bit of pine flavored hops at the very bottom background of my taste buds. Pretty good taste, but not super amazing.

Amazingly smooth and creamy medium body which is the real highlight of this beer. Very light carbonation plays on the tongue but gets washed away in the smooth creaminess.

Pretty damn good beer but not the best milk stout out there, that goes to Left Hand Milk Stout… but only on a nitro tap, forget all that nitro bottle crap. Nitro tap aside this is an astounding milk stout. This is however very different from most Three Floyd’s beers as it isn’t overly hopped, though similar to all others in it’s excellent quality.

One other prop I give to this beer in a non-liquid releated area is the nice artwork and excellent naming, a thing Three Floyds often excels at. If you haven’t seen/read A Clockwork Orange, or have tried to block out which I can’t blame you for, you may not get the reference. In the movie the main character visits a “milk bar” and orders a Moloko Plus, which is milk + drugs. It’s also similar to monoko which is Russian for milk, that could be why 3Fs chose the name… but I prefer the first story better.

If you’re looking to score your own 3Fs’ beers they are occasionally released in Ohio but are rare to come by, for a better shot head over to The Brew Professor for some tips on making a run fffor the border (see what he did there with the 3 Fs), the Indiana border that is. I followed his suggestions to score these two beers and a few others.