Upland is a small regional brewery hailing from just over in Bloomington, Indiana. Upland came to the Cincinnati area last fall, without too huge of a splash on the scene. I’d had their brews before on trips to Indianapolis, they have a small tap room north of downtown, but never got around to having more since. One reason is that I enjoyed their Dragonfly IPA and pined after their Double Dragonfly double IPA, but was never able to find it… until now: 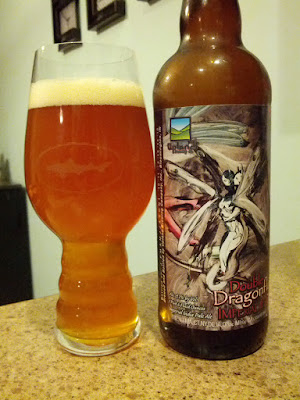 Cloudy burnt orange color with a white head built of lots of tiny bubbles. It’s unfiltered! (Or something is very wrong with it, but I’m going with it being unfiltered.) Holy crap, didn’t know that and I’m so excited. After having Bodhi over the weekend I’m pretty sure unfiltered DIPAs are my favorite style!

Moderately deep hop aroma showing off earth and pine aromas with a bit of citrus in the mix.

Nice taste but not amazing. Very hoppy taste with more earth and citrus action. Some pale malt body rounding things out. Mild bitterness, mostly enough to let you know that it’s an IPA from outside of California. I’m picking up on a bit of off taste as well but can’t quite place it, maybe a bit metallic or soapy or something like that. Oh, and very little notice ability on the strength of the alcohol, it’s there but not overpowering.

Light bodied mouth feel with a wee bit of carbonation and some kind of slickness.

Overall I’m not as impressed as I hoped I’d be, especially after finding it was unfiltered. It’s still a good regional craft beer that I’d be more than happy to have again. Best part? $5 for the bomber! Seriously, not on sale or discounted or anything like that. I got this at Cellar’s Pub in Lebanon but it should be available at most better beer stores… even though it took me a while to find it. Bottom line, try it if you see it at the very least to support a localish brewery.