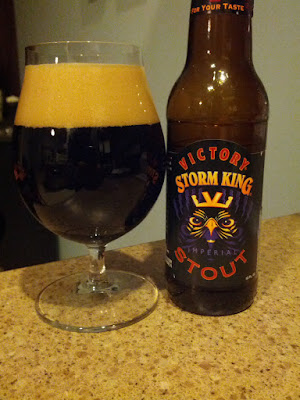 Fills the glass with a super dark chocolaty brown topped with a light brown head that is extra thick and going nowhere. Very excellent and classic stout appearance.

Kick of strong roasted malt aroma slams your nose with force. This beer does not kid around about it’s maltiness or it’s strength! 9.1% is pretty high up the (average) ABV scale and you can get a fair whiff of that. Also picking up a fair bit of earthy hops as well.

Taste is pretty good but not mind blowing. Malt is pleasantly complex and pretty diverse with smoke, molasses, coffee, rich dark chocolate. Much less hop character coming out then I expected just a bit of earth. There is quite a bit of astringent action from the roasted malt. The last thing I pick up on is some dark fruit action like blueberries or cherries or something.

Smooth and creamy mouth feel that borders on medium-heavy.

There is no shortage of stouts, imperial or otherwise, available out there. They very greatly from crap to astounding mind blowing status. This falls solidly on the high end of that spread and while most of the mind blowing stouts are rareish this is ultra-available. Like most Victory beers this should be available wherever better beers are sold in the tri-state area.