Back in the heady days (of 2 weeks ago) when folks (or just me) were hounding around town trying to track down every last bottle of Founder’s KBS (my review) Josh told me to look for Epic’s Big Bad Baptist Imperial Stout. This is a bourbon  or whiskey, barrel aged beer just like KBS and from what I’ve been told it has a very similar profile. Luckily though, unlike KBS, it’s much more available much more often. I scored this bottle at Arrow Wine & Liquor up in Centerville and they had 2 more bottles left. Each batch of the Big Bad Baptist is slightly different than the others and this one, batch #10, has the following: 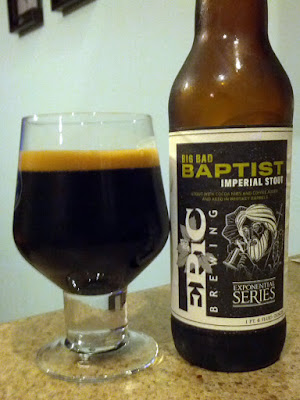 Extra dark black color that does not let a single bit of light through. Topped with a dark tan almost chocolate colored head. Not too much head though just a slim layer that slides down fast.

You can smell the chocolate, coffee, and alcohol right off the bat. None of those aromas are super potent and there isn’t much more in the nose.

Taste is filled with chocolate lots and lots of chocolate, probably the strongest chocolate flavored brew I’ve had yet. Seriously, if you let it linger in your mouth for a bit it really starts to feel like melted chocolate. Beside the chocolate you can tell that this was aged in whiskey barrels as well as bourbon barrels, however the whiskey is the dominant trait next to chocolate. There is plenty of espresso, vanilla, and wood flavors as well all of which are pretty common to barrel aged stouts. As it warms and I get into the second glass a bitter astringent flavor from the coffee begins to rise while the level of my sobriety plumets. Sharing is caring… and when it comes to this bomber sharing is also sensible.

Very heavy body with a thick syrupy feel and almost no carbonation.

This is a decent beer but I preferred KBS a lot more as it’s flavors were much more balanced and less heavy on the chocolate. Though the price and easier availability of this are significantly better, better enough that I will likely snag a bottle to age in the cellar and see what changes.