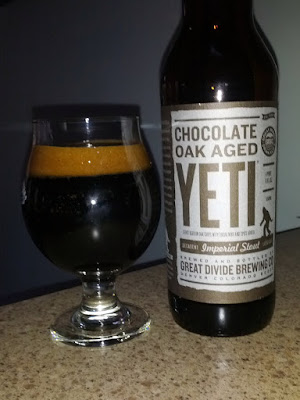 I think this color is in line with the dark blackness of empty space. Except of course the empty darkness of space isn’t topped with one of the darkest heads I’ve ever seen. I’ve seen white, and all various shades of tan, but this… this head is strictly light chocolate colored.

Not too much aroma going on which is very surprising.  So often these chocolate aged imperial stouts are in your face with alcohol, chocolate, coffee, or some combination of them all and more. What aroma there is has subtle hints of chocolate

Bitter chocolate flavor dominates this brew helping it live up to its name. As far as the oak aged part of its name I get some small hints of that but not a lot else. Slightly disappointed by the lack of variety in the taste.

Very thick, chewy, and syrupy body that is super heavy and has medium carbonation.

There are a lot of imperial stouts around these days, so many in fact that I would not likely get this one again. There is nothing wrong with this beer and it’s not “bad” in anyway it just has some really steep and highly aggressive competition. If chocolate is more your thing over bourbon or coffee then I’d suggest seeking this out, and grab a Brooklyn Chocolate Stout while you’re at it. It’s should be available right now at most better beer stores around town and will be back next year if you miss it this time.