Today is May the fifth known across all of Mexico and the USA as Cinco De Mayo (literally translated as fifth of May). It is in general a celebration of Mexican culture and being as this is a blog about alcohol, I’ll be talking about Mexican beer! In general it’s the same as American beer, so not too exciting there. Also I was offered some free samples by a PR firm for a brewery… so that helps too.

In America Cinco De Mayo is basically treated as Mexican St. Patrick’s day, which is a shame. I learned today it’s actually a pretty bad ass story. It’s the celebration of the battle of Puebla in 1862 where 4,000ish Mexican’s fought off 8,000ish more well armed invading French troops. The battle was part of a war over Mexico owing foreign countries money, most other countries worked things out with Mexico but the French decided to fight it out. I’ve also found that it’s a much bigger deal here than in Mexico. So it’s pretty much like Canada getting wasted to celebrate the War of 1812 or something.

These three cervezas (Spanish for beer) are all from Cuauhtémoc Moctezuma Brewery, which is essentially the Anheuser-Busch of Mexico. I received samples of Tecate and Tecate Light, which are essentially the Mexican version of Budweiser and Bud Light. I also got a sample of Bohemia Clasica, comparable to something like a Stella Artois or Rolling Rock, a slightly higher end brand of pale lager. I had personally never heard of any of these brands, however, I have had a few Dos Equis which is also owned by the same brewery. I found Dos Equis all right but really dig The Most Interesting Man In The World Campaign and even more so the memes it has inspired.

Very lightly sweet aroma mixed with something unpleasant that I can’t quite place.

Tastes like slightly bitter water, seriously. I’ve never had a beer with less taste to it.

Quite crisp and highly carbonated with an extremely light body.

Wow, this is impressively unimpressive. At 3.4% it’s basically slightly alcoholic, bitter, carbonated water. But hey, 111 calories is pretty damn good for those on a diet! 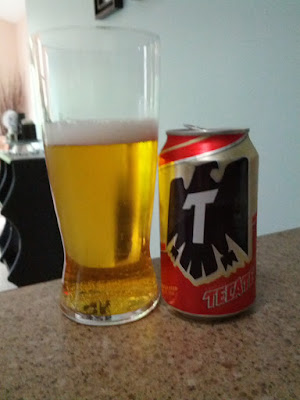 Aroma shows off hints of grain and a bit of corn sweetness.

More full and well rounded taste… of grain, corn, and a hint of citrus hops.

Some slightness lingers on the light weight mouth feel and more crisp carbonation.

I like this FAR better than Tecate Light and would pull this one before a Bud, Bud Light, or Corona. And while that logo is pretty bad ass (who doesn’t love an eagle) it contains a beer that is only mediocre. 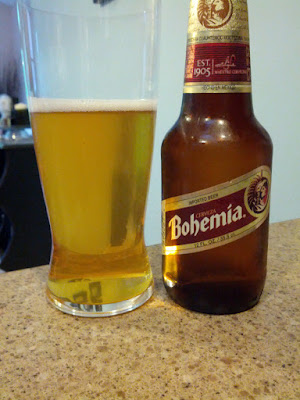 Looks just like the Tecate with yellow color and white head.

Sweet malt aromas and a tiny amount of floral hops.

Interesting flavor with sweet malts balanced with a small amount of hop bitterness.

Easily the best tasting of the three, but that’s not really saying too much. All three of these beers are what they are though, lightly flavored, low alcohol, adjunct lagers that appeal to a wide group of people.

FULL DISCLOSURE: These beers were sent to me for free by Cuauhtémoc Moctezuma Brewery’s PR Firm. To our readers, and any breweries interested in sending me stuff, giving me free beer impacts the review in only 2 ways. That way is that I WILL review the beer and I WILL write a blog post about it. Giving me free beer does not guarantee you a favorable review or that I will tell everyone to go buy it or anything like that.