Hard ciders have been growing in popularity along with craft beer during this recent boom, though at a much smaller percentage. Years ago your selection was limited to old English brands then Woodchuck came on the scene and started to dominate. Now there are a plethora of companies making cider and 2 “local” ones that I’ll be trying tonight. My wife has been a cider lover for a long time now and I’ve been meaning to steal one of hers to review and that day has finally come.

The main difference between beer and cider is the source of the alcohol. Beer uses the sugar from malted barley while hard ciders rely on the sugar in apple juice. Don’t think this means hard ciders are light, or low alcohol, in fact the Oliver Original cider I’ll be trying tonight is 8%!

I have come to believe that there is a general perception that hard ciders are for women or something like that. Please note, I am not saying this is my perception nor am I trying to start any kind of sexist war, just stating something I’ve observed. Honestly, I think it’s nonsense and according to some facts from Angry Orchard it is equally consumed by men and women. Anything can be for anyone it’s just all about what their personal preference is. My hope is that this post will bring info about hard cider to our readers and encourage them to give it a go. That said, on to the reviews! 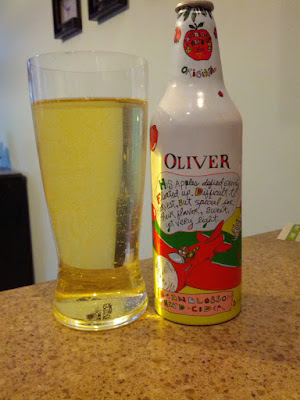 Fantastically clear and very pale yellow/gold color that honestly looks a lot like Bud Light. No head what so ever, though I’m not super sure if cider’s should have a head on them. It does look a lot like apple juice though.

Very fruity aroma with lots of sugary action and a noticeable amount of alcohol.

Pleasantly sweet taste that screams apple. I was concerned that this was going to be sickening sweet, like Georgia sweet tea, but am glad to find that’s not the case though It is certainly sweeter than most beers.

Very light body with an extremely crisp and refreshing mouth feel. This is probably my favorite part of this drink.

I digg this and can see myself drinking more of them after mowing the lawn on hot summer days, a spot usually reserved for a Rivertown Helles. Though the 8% this thing packs could make for an interesting afternoon, I’m about half way through and definitely feeling it.A few words on packaging before moving on to Angry Orchard. This is a very interesting can, bottle, canottle, cabottle? bottan? It’s a tall aluminum can, I dig the convergence of cans and bottles in this format and would like to see some beers packaged this way as well. 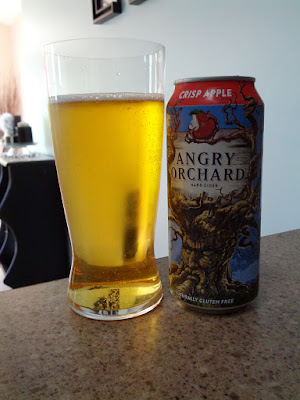 Much richer golden yellow hue then the Oliver had. Also packs noticeably more “head” then Oliver did, it’s not really a normal head as much as just a ring of bubbles around the top rim.

Very strong apple smell with loads of sweet apples, but not much else.

Overly sweet apple flavor that is over done in my opinion. Like the aroma there is nothing else happening here except for the apples.

Between these two the Oliver is the clear winner in my opinion. It’s got a much better overall experience and more alcohol, on the upside for this beer is that it’s cheaper, session-worthy, and massively available wherever any beer is sold.

I mentioned earlier how both of these ciders were “local”. I’m using “local” because Bloomington, Indiana isn’t in the greater Cincinnati area but is only 2 1/2 hours off. Angry Orchard claims to be from Cincinnati, Ohio. This threw me for a great loop when my wife first spotted it in Asheville, North Carolina of all places. I knew that no place making cider in Cincinnati could have popped up completely under my nose without me knowing at all. After doing a little digging online I quickly discovered that Angry Orchard is a Sam Adam’s product. So yes, it is “local” as it is brewed at Sam Adam’s facility in Over-The-Rhine.

One thought on “A Tale of Two Ciders”