What follows should not be viewed as a how-to on homebrewing as we likely did things wrong, this is just my experience as a first-time homebrewer.

While hanging around the neighborhood fire pit, I discovered a neighbor who is interested in brewing beer and one who tried once before but gave up. With the 3 of us working together splitting costs and results I’d end up with about 18 bottles, a much more enticing number for me.

One last hurdle was that living in Monroe means a 45-minute drive to a homebrew store. That changed when Osborn Brewing opened only 10 minutes away. Brent, the owner, heard of our plans and invited us up to brew along with him last month.

With the day at hand, we packed up the rig plus a couple of beers and headed to the store. With everything setup at the store, we began brewing… which is to say waiting, lots of waiting. Waiting for the grain to steep, waiting for the sweet wort to boil, waiting for the hopped wort to cool, and now waiting for the yeast to do its magic and turn that wort into a pale ale.

Overall not a bad way to spend the afternoon. You get up to do a bit of activity: check the temp every once in a while, drink a couple of beers, add some bittering hops, chew the fat, add some flavoring hops and keep on waiting.

After six days of waiting [which we later found out is way too short], the yeast appeared to stop doing its thing, and it was time to transfer our creation into bottles. 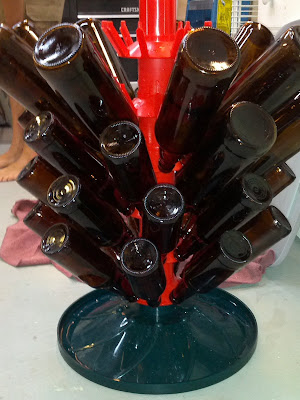 The entire bottling operation was easily the most amount of continuous effort we had exerted thus far in the process as there was no waiting around today. We had one guy pulling bottles off the tree, I was filling the bottles, and another person was picking them up to cap them. Then more waiting this time for 21 days. We only made it 14 days before impatience won and we cracked one open.

We ended up taking pale ale ingredients with brown ale instructions and made a not horrible hoppy session beer brown ale. Nice aroma and smooth caramel flavor with a decently bitter background. Some sweetness comes out stronger as it warms a bit though there was a bit of vinegar kind of off flavor. We may not have made what we intended, but we did make drinkable beer on our first time ou and as I finish this post our second brew is fermenting.