A month or two back the beer forums on the internet got worked up into a fervor over a new product. OnTapp is a flavor enhancer similar to the popular Mio flavors for water, except instead of turning water into berry pomegranate OnTapp turns Bud Light into a Pale Ale… or at least it claims to. I contacted the company and asked for samples which they happily supplied along with contact info for the founder, Doug Davis. Read on to find out my thoughts and if these “flavor enhancers” are worth your $5. 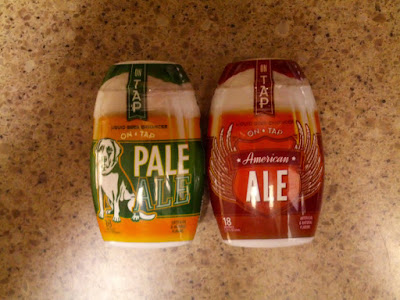 The back story behind this product was a type 2 diabetes diagnoses. The creator was a lover and homebrewer of Scottish wee heavies, very flavorful and high abv beers, sadly they had to go. He was able to get back into brewing by changing the mash temp and lowering the abv without significantly altering the flavor.

He decided to screw with some neighbors at a block party by pouring PBR into homebrew bottles. This led to reducing his wee heavy down to just the flavor profile and then adding it to PBR, and it worked!

Sadly that wasn’t cost effective but it started down the path towards this product. He did research and found flavor houses, which can reproduce any flavor and scent, which were able to make this product in a cost efficient manner.

While talking with the owner he made it clear that keeping these as natural as possible was a high priority for them – the American Ale does include some artificial flavors for coloring – they both have no calories, no carbs, no GMOs (Genetically Modified Organisms), are sugar free, and gluten free.

I asked what the role of this product was for peoples life and what market they were after? Millennials, 21 – 35 year olds especially 21 – 28 range, “they’re going to go out on the weekend and order craft beer blowing their cash flow. On the week nights they’ll go with a cheaper beer to get by. This product allows them to get that same taste as a lesser cost.”

What’s the future hold? They’re working on a shandy and cider flavors, both of which should be all natural though the cider will have some sugar. While they have been working on a stout it is currently prohibitively higher in cost.

The bottom line and last word from the founder Doug Davis was that OnTap can be one more way to get people into craft beer. Now lets get onto what I think of these two products!

Pale Ale: I decided to make my first test a real-life field test. We were out celebrating our friends engagement (Congrats Jess & Ryan!) at Bar Louie in Newport, I assumed the tap list would suck but they in fact had Lake Erie Monster and Blank Slate’s Lesser Path. But I digress, luckily they did also have Bud Light (what a shock right?). I consider this the real life test because thats how I see this being used. Out at a bar with a crap tap list or a football stadium and 16 oz plastic bottles of B/M/C.

Definitely makes it more like a pale ale and produced a mighty head. Not sure exactly how much I added initially, but liking IPAs I figured the more the better. Smells a bit like a Pale Ale with some hops and bitterness, really a huge improvement over the bud light. Taste was… I’m not gonna say this is like Sierra Nevada Pale Ale but it IS much nicer then bud light. I added more “flavor enhancer” and it definitely looks just like a Pale Ale now. Again the flavors have improved… At least Initially. There is some weird off flavor after taste that I can’t place at all but is highly unpleasant, maybe I added too much. 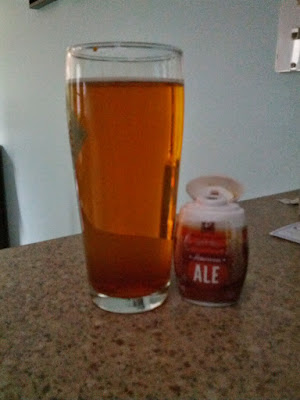 American Ale: The coloring for the American Ale is definitely spot on for a brown ale, I mean damn it’s hard to believe this was actually bud light! The aroma is much more to style here then with the pale ale. Strong presence of caramel and light citrus hops. Still way more light bodied then it should be. Slight bit of malt flavor that is definitely on the way to being a brown but not quite there yet. It’s also very carbonated, not sure what this stuff does but it’ll give a head to anything!

In the spirit of adding as much as you want to get the flavor you like here goes another 2 squirts. Ok… so watch the pressure on these guys. I just squeezed as little as possible to try and get another squirt but ended up with a blast that created so much head it almost went over the glass. Marked improvement on the taste and flavor, same characteristics just more of them.

As with most things in life, moderation is key. I dropped in a solid 5 second squirt, enough to turn this bud light an extremely dark brown plus leave a, for lack of a better term, skid mark of brown syrup on the head. The flavor now reminds me of some kind of artificial form of completely liquid pure caramel, better than Bud Light but not really enjoyable.

Bottom line is that these things don’t make Bud Light into a craft beer but they do make it significantly more enjoyable when you’re in a pinch where real craft options are unavailable… as long as you don’t add too much. I will definitely be holding onto these now that it’s football season and Paul Brown Stadium is a craft beer dead zone.

FYI: Do NOT try to squeeze this into a measuring cup to measure out exactly 1/2 teaspoon… it will spray back up over the counter and walls.

FULL DISCLOSURE: I contacted the On Tap people and they sent me 2 samples to review for free. To our readers, and any breweries interested in sending me stuff, giving me free beer impacts the review in only 1 way. That way is that I WILL write a blog post about it. Giving me free stuff does not guarantee you a favorable review or that I will tell everyone to go buy it or anything like that.