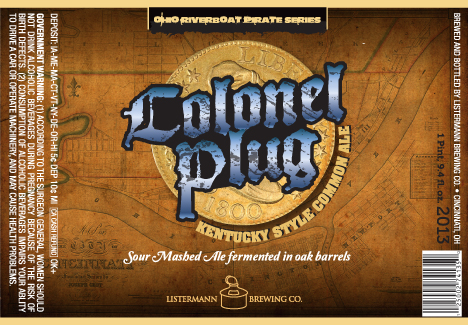 I had noticed the label approval for this one a little while back, but now we have the details concerning the beer and its release. From Jason at Listermann:

Listermann Brewing Company will be releasing its first beer in its new Ohio Riverboat Pirate series, Colonel Plug, a collaboration with 1987 Home Brewer of the Year and the founder of the Bloatarian Brewing League in Cincinnati, Ray Spangler. Ray and head brewer Kevin Moreland decided to revive one of the three beer styles that originated in the United States: Kentucky Common.  The Kentucky Common is a sour mash beer that had an 18 hour mash before it was boiled to naturally sour the beer.  The beer was then aged in an American oak cask.

Colonel Plug will be a brewery only release on Friday September 27th at 5 pm. It will be available for draft and bottle purchase. Listermann Brewing Company is located at 1621 Dana AveCincinnati, OH45207

Edit: These are $13.99 a bottle with a limit of two bottles per person.