Ohio is receiving lots of distribution from new (to us) breweries at the end of 2013.  New Belgium, Deschutes, and others will be here before the end of the year but it’s getting kicked off with Clown Shoes. Clown Shoes is a contract brewing operation out of Massachusetts that’s known for somewhat insensitive beer names like Tramp Stamp, Lubrication, and Brown Angel. Controversial names haven’t stopped them from making big and interesting beers for a few years distributing them to a variety of states before finally coming here.

Clown Shoes is initially gracing Ohio with 6 different brews: Galactica and Hoppy Feet are here in 4-packs of 12 oz bottles, Chocolate Sombrero, Genghis Pecan, and Muffin Top are all in 22 oz bombers, finally Tramp Stamp is draft only, at least for now. I did a review of a bottle of Tramp Stamp that I brought back from Georgia last year, you can read that here. I also had a bottle of their Chocolate Sombrero which, in short, is a spicy chocolate imperial stout starting out with some heat that slowly builds and adds in rich chocolate as the glass warms.  I have yet to have Genghis Pecan or Muffin Top and my thoughts on Galactica and Hoppy Feet are just below! 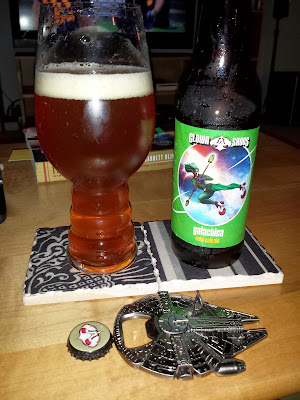 Super dank and grapefruit hop aroma from the Galaxy hops. Light bread and toast aroma in the background from the malt.

Attractive golden amber hue that is surprisingly cloudy, I’m wondering if this was unfiltered. Topped with a white head that started thick but slimmed down quickly and left nice lacing

Hops are the dominant flavor profile with the same dank, grapefruit, and a touch of citrus features from the aroma coming through again. There is plenty of bitterness but not an overpowering amount and it is balanced nicely by the lightly toasted malt.

Overall this is an ok beer that does a fine job of showing off a new and interesting hop. These kind of IPAs, featuring a new hop, are becoming more common and done by a variety of brewers across the country like Green Flash’s Green Bullet.

80 IBUs of Columbus and Amarillo balance a dark malt backbone. Warmed in the glass, bittersweet flavors emerge from beneath the West Coast hops. This Black IPA was first made as a joke, but we crafted the best ale we could dream of with the best ingredients we could find. People wanted more. Clown Shoes was born. 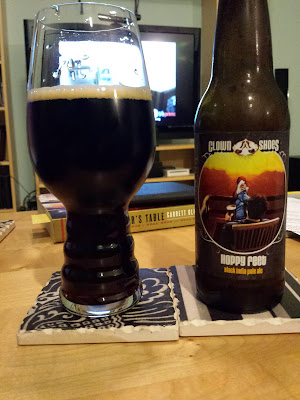 Curious combo of sweet and citrus. The very first thing I get is a hint of sweetness making me thinking lemons, grass, bread, all kinds of weird stuff not necessarily sweet stuff… but I dunno my brain is saying sweet. This is followed by a touch of orange citrus but reminds me more of a breath mint kind of orange. Overall a weird aroma that I’m not sure what to really make of it. Mind you this isn’t bad, just different and not standard.

No doubt about it, this is black… well actually it’s somewhere between purple, super dark brown, and black. The head, what little there is, was a light tan color that didn’t hang around long and left minimal lacing.

Taste is definitely bitter off the bat with roastiness that doesn’t fill in until after you’ve swallowed it. There is more bread, lemon, orange all balanced with a light roast and toast. Like the aroma the taste in this makes for a very strange beer.

It’s a very light body which clashes with the notion delivered from the roasted bread flavors and aromas. Carbonation clearly denotes it as an IPA.

This is definitely a good Black IPA, which I now realize is a style I’m not a huge fan of. I’m no stylistic die-hard, my two favorite styles are India Amber Ales and Spicy Stouts so I’m open to any combination of flavors. However, this style just isn’t for me, but like André 3000 says “Whatever floats your boat or finds your lost remote”