There is a growing trend among craft brewers to move their IPAs away from the traditional 3-C hops (Cascade, Centennial, and Columbus) and on to new and exciting hop varieties that have only been developed in the past 10 – 20 years. I mentioned this last week in my review of Clown Shoes Galactica which predominantly features the galaxy hop. Green Flash has decided to feature the Green Bullet hop in the aptly named Green Bullet beer. I’ll let Green Flash’s blurb about this beer take it from here.

Named after a super-robust New Zealand hop, Green Bullet™ is a well-balanced Triple IPA being bottled today for the 1st time ever. Brewmaster, Chuck Silva initially released this Pacific Gem to celebrate the Green Flash 9th Anniversary in 2011, and it was an immediate hit! Now, this cult favorite will be available from coast-to-coast as a seasonal release from September through December 2013. Be on the lookout for this high-caliber addition to our arsenal in 4-packs, 22oz bottles and on draft, because you do not want to miss the release. 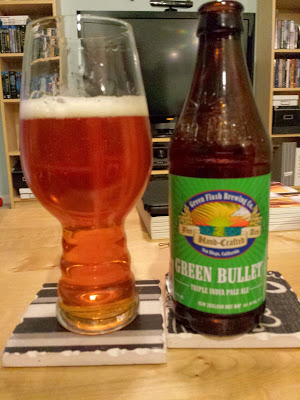 Holy hops Batman! The bouquet of fresh tropical fruit is mind-blowing. Pineapple and mango scream in the front with loads of citrus and a touch of pine come along for the hop aroma ride. I get a tiny touch of bread malt but it’s such a wee tiny touch it’s barely noticeable.

Beautiful shade of orange amber brown with pristine clarity and a dollop of fluffy off-white head.

The tongue turns up more toast and biscuit malts but get neither confused nor concerned the ensuing hop bomb more than justifies the triple india pale ale this beer claims it is. Plenty of mango, pineapple, grapefruit, citrus, and pine blast your tongue with deliciously flavorful and intense bitterness. That bitterness isn’t as powerful as the flavor but there is plenty of it to go around.

Medium-lightish weight to the mouthfeel with a smooth carbonation. Surprisingly there is no sense of the 10.1% and I didn’t even realize it was that strong till I got the Sky’s The Limit badge on Untappd for checking into 5 beers over 10%.

I don’t know if this is a triple IPA but this has immense hop flavor, solid bitterness, and top marks in all other IPA guidelines. Triple IPA or not it’s a damn good IPA and I can safely recommend it to any hop aficionados and plan to drink it again soon.