In honor of the first significant snow fall in Cincinnati today I decided it was time to get around to trying the sample of Accumulation that New Belgium kindly provided me in advance of their statewide roll out next month (December 16th). Recent brewing history has had winter seasonal beers focus on the “winter warmer” variety of a dark, roasty, spice laden brew packing a highish abv. This year both Dogfish Head and New Belgium are throwing a curve in that tradition. Dogfish Head is bringing out a cider/beer hybrid featuring pear in a pilsner. I’ll let New Belgium explain their new brew below:

Accumulation White IPA was inspired by the white beauty that falls each winter from our Colorado sky. Flurries of Mosaic and Amarillo hops bring soft fruit and citrus flavor, followed by a layer of bitter. Piled high in IBUs, Accumulation will make your winter brighter. 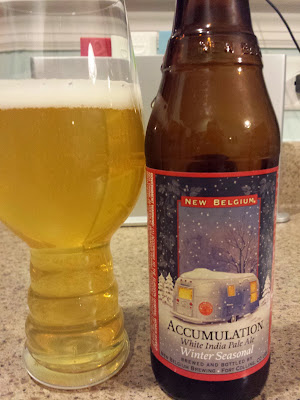 Pours a curious combo of golden-yellow straw that is absolutely clear and full of carbonation bubbles. That combined with the thin layer of white head makes the appearance of this beer strongly remind me of Bud Light.

Luckily appearance is where all similarities end. As soon as you get your nose near it you know your dealing with something completely different. The aroma isn’t any hop monster but it still packs a delicious tropical, citrus, and spice hop aromas.

A light taste of those same tropical and citrus fruits play around on the tongue, not as impressive as the aroma led me to hope for. Where the hop flavor is lacking the bitterness steps up its game big time. An IBU number can be very deceiving but there is no lie in the 70 IBUs in this beer, you get every one of those and a few more.

Body is very light with loads of tingly carbonation

This is a very weird beer. Looks like Bud Light, smells like a hop bomb, tastes surprisingly bitter, and a body like carbonated water. It’s definitely good and enjoyable though I think I’ll most enjoy tricking a friend or two with its appearance. That said… I don’t think this is going to be the first thing I reach for on a cold winter night. I feel it’d be better placed in spring.

FULL DISCLOSURE: This beer was sent to me for free by New Belgium. To our readers, and any breweries interested in sending me samples, giving me free beer does not guarantee you a favorable review, though I do promise to review your product and publish a post on it.