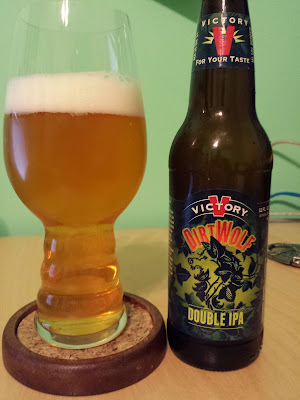 Beautifully white head built of thousands of teeny tiny bubbles leaving a delicate lace to the glass. Hazed and clouded golden-yellow/orange liquid. This is a really delicious looking, to me, beer that I can’t wait to start drinking.

Woof, amazingly pungent hop flavor but minimal bitterness. Don’t get me wrong there is some but if you don’t like IPAs due to bitterness then try this one. This is a Double IPA but the awesome hop flavor is doubled, not the bitterness. The malt character is present but comes out as a low and subtle background note of bread without much more going on there. The malt balances the bitterness of the hops but none of the flavor, which is fine my be.

Like most IPAs this has a medium-light body with moderate carbonation and the slightest hint of alcohol warmth.

Wow, I wish more IPAs were like this. I’ve never been a big bitterness guy so this plays right into my palate. This flavor profile of IPAs seems to be an emerging trend in craft beer and I hope this wave keeps going, rising higher, and spreading farther. DirtWolf is a bit on the pricey side, I think it’s around $11 or $12 for a 4-pack but I also think it’s worth every penny of that and you should try it as soon as you can!