If you haven’t heard of Founders CBS I don’t blame you. If you haven’t heard of Founders then I am very sorry for you. Founders is a fantastic brewery out of Grand Rapids, Michigan that makes a range of amazing beers. The story of CBS starts with their winter seasonal Breakfast Stout. Founders Breakfast Stout is released from October through February and should be found in most better beer stores in most of the eastern half of this country. It’s a delicious oatmeal stout with flavors of chocolate and coffee, if you haven’t had it go out and buy it now.

Every April Founders releases KBS (Kentucky Breakfast stout). It is only available in the best (best at selling Founders that is) beer stores and you will likely need to enter a raffle or know someone at the store to get it. To make KBS Founders  [correction: KBS is not exactly the same recipe as Breakfast Stout, just very similar]  ages it in bourbon barrels for a full year. So you get all that awesome coffee, chocolate, and oatmeal action found in the Breakfast Stout plus the oak and vanilla attributes brought on by bourbon barrels.

Canadian Breakfast Stout is an Imperial Stout brewed with a blend of coffees and imported chocolates, then aged in spent bourbon barrels that have most recently been aging pure Michigan maple syrup. The final product has had stellar reviews and is usually among the top 5 highest rated beers in the world on BeerAdvocate.

Founders CBS has become an unobtainable white whale for many craft beer aficionados out there. It’s so rare that in my 3 years of trading beer I have never once seen it offered for trade though many people are in search of it. I had honestly given up my hope of every having this beer until my annual trip to visit my family in Atlanta over Thanksgiving led us to The Brick Store Pub. The Brick Store Pub has an obscene cellar list that includes a bottle of CBS for $150 dollars! Though $100 of that goes to charity, so I rationalized this purchase because I always give around $100 to charity around the holidays but hadn’t yet this year. Thus that $100 took care of my yearly charity donation and I got CBS!! Enough of that, on to the beer! 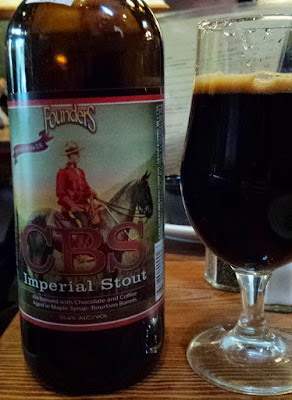 Before we get to my thoughts Josh was kind enough to provide his memories of when he tried CBS back when it was released:

I’ll preface this with stating that it’s been about two years since Founders CBS was released in bottles and I didn’t take notes the two times I had it shortly thereafter, so my memory may not be the most reliable. Honestly, I didn’t think the maple was overpowering, which, in my opinion, was good. It factored more into the smell than the taste. Like KBS, the beer up front was coffee, chocolate, some anise/licorice, and oak, with the maple providing backup vocals. I remember it being low carbonation and that it got way, way better as it warmed up. Noticeable maple aroma with significant bourbon, coffee and roasted malt aroma.

Now for my raw thoughts which are much less refined than usual as I typed them on my phone while enjoying CBS leaving me a fair distance from sobriety.

The flavor is smooooooth. Lots of bourbon notes, some coffee, and only hints of the maple which comes in as a noticeable sweetness.

Thick and creamy body with the lightest hint of carbonation but a semi significant dose of alcohol.

Black as the night with a thin dark tan head.

Looking back on my notes and comparing them to what Josh remembered I don’t feel like the maple has fallen off as much as many people claim. I think the thought of the maple significantly falling off may be something folks tell themselves to console themselves in their inability to get this beer. I say that from experience as I told myself, and others, the same thing many times. Even if the maple has fallen off drastically this beer is still one of the best tasting and smelling beers I’ve ever had. Sell your first-born, come to the brick store pub, give $100 to charity and pay $50 for this fan-fucking-tastic-awesomeness.

Since Black Friday Bourbon County Brand Madness just swept through town I thought it Josh’s additional memories on the Founders CBS release are quite relevant:

I think it was one the first beers released in Cincinnati that caused a lot of irritation and angst from craft beer fans about having to chase bottles. CBS was spread thin, with stores being all over the place regarding how they sold the few bottles they received (most stores received bottles from broken up cases). I think it was one of the first “whoa” moments where many of these beer stores realized what a mess these limited beer releases can become if not handled properly.